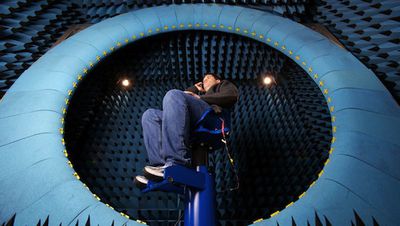 Apple has revamped the antenna performance page on its website, removing references to and videos of the performance of competitors' smartphones in comparison to the iPhone 4. Apple launched the page after its iPhone 4 press conference to demonstrate how a number of other handsets, including ones from Research in Motion, HTC, and Samsung, as well as the iPhone 3GS, see signal attenuation when gripped tightly in the hand.

Apple's continued interest in drawing its competitors into the antenna performance discussion was furthered by several updates to the site to add the Nokia N97 mini and the Motorola Droid X. Just a week after the most recent update, however, all of the comparisons have been removed, leaving only general claims that the attenuation issue affects most models of smartphones.

The opposite of amplification, attenuation happens whenever a signal is obstructed. All antennas - including television, radio, GPS and mobile antennas - can experience attenuation. And with most antennas, the density and composition of the human hand can cause attenuation to a greater degree than some other materials. On a mobile phone, signal loss typically occurs when your hand attenuates the most sensitive part of the antenna. Which, on iPhone 4, is the black strip of the lower left corner of the antenna band.

The reason for the removal is unknown, with speculation running from Apple receiving complaints from other handset makers to the company simply wishing to reduce the amount of attention drawn to the issue now that its free case program is underway and Apple bumpers are making their way into the hands of consumers. Interestingly, the videos remain available on the company's YouTube site and on many, but not all, international versions of its antenna performance page.

As I have said before, in the future this will be taught as a masterclass in how to act when under deliberate and sustained assault.

Most certainly. Whether people would like to believe it or not, Jobs is a master of PR and spin, and can handle the public quite well.

The reason for the removal was simply that it was no longer necessary, and did speak in poor taste, albeit effectively. Had it not been offensive, it would have stayed, but it was really just a stopgap until the bumper program and international launches got under way; this removal made that quite clear.

You know though, I find it really astounding how people expect a company to be perfect, as if humans themselves were. I'm not defending Apple here either; EVERY company has its fault, and usually a large multitude of them. I really think the latest maelstrom was a byproduct of sensationalism and Internet "fanboys" who make a large hubbub on tech sites that normal people don't necessarily read-- unfortunately that has run off onto the technologically unaware this time.

Of course they'll be some people on here who will still bash Apple (and ardently defend another big corporation), simply because they "didn't handle the situation well," as if that only applies to Apple, and no other large corporations. I'm not saying the criticism isn't deserved, but most people really are overreacting. All caps and abbreviations does not make your point any more compelling; neither does ten angry smilies. From a consumer's perspective, no, they didn't handle it well, but from a business (or investors) perspective they handled it beautifully. This will probably go down in the books really; I mean they managed to avoid a recall and delay/quell any ill PR effects, at least on a major scale. That's impressive for any major company.

EDIT: Cue the "you're a fanboy" accusations, because speaking logic and equalizing companies is clearly taboo.
Score: 1 Votes (Like | Disagree)

Zwopple
I love how many people bitch about this issue. It's simply astonishing.

The product is selling like hotcakes and most people having to wait on an order list for 2+ weeks just to get one.

The flaw has been perceived as the 'signal death' if that were the reality I doubt people would be buying it so fast.

All companies make mistakes.. and all companies produce some **** products every once in awhile. Guess what when it's REALLY a **** product the sales show so ( windows vista, palm pre etc.. ).

In general most people are probably extremely happy with their iPhone 4 and doubtfully have loads of issues with the antenna.

If you have an issue don't buy an iphone 4.. return it if you already have one.
Score: 1 Votes (Like | Disagree)
Read All Comments