Research firms Gartner and IDC yesterday both released preliminary reports detailing U.S. and worldwide PC shipments for the second quarter of 2010, with both firms showing sales growth of Apple's Mac product outpacing that of the industry as a whole. 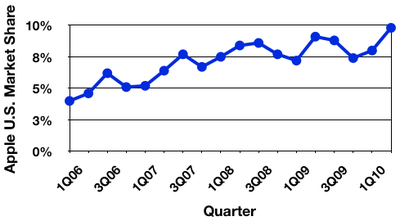 Apple's U.S. Market Share Trend: 1Q06-2Q10 (Gartner)
According to Gartner's report, Apple placed fourth among U.S. computer shipments with a 9.8% market share on unit growth of 24.7% over the year-ago quarter. The nearly-10% U.S. market share for the quarter marks a new high for Apple over the past 15 years or so according to Gartner's numbers, up from the previous quarter's 8.0% and from 9.1% in the year-ago quarter. Apple also climbed back into fourth place for U.S. shipments, taking back the spot it ceded to Toshiba two quarters ago in the face of strong netbook sales.

Gartner's Preliminary U.S. PC Vendor Unit Shipment Estimates for 2Q10 (Thousands of Units)
Overall, Gartner saw a healthy 16% gain in U.S. PC shipments over the year-ago quarter, but pointed to slower growth in netbooks, reportedly due to cannibalization by Apple's iPad, which is not included in the study's numbers.

"The consumer PC market registered double-digit shipment growth, but consumer mobile shipment growth slowed. This was due in part to slower growth of mini-notebooks," Ms. Kitagawa said. "Surging popularity of Apple's iPad temporarily cannibalized mini-notebooks, as well as consumer notebook sales to some degree. It is not certain at this stage if the cannibalization will continue with the current price point of media tablets."

IDC similarly reports Apple's U.S. Mac sales growth as outpacing the overall industry, but to a smaller degree. IDC puts Apple's U.S. market share for the quarter at 8.8% on a unit increase of 15.4% from the year-ago quarter, when it held an 8.6% share of sales. Still, that performance moves Apple back into fourth place ahead of Toshiba and outpaces the more modest overall U.S. industry growth of 12.6% seen by IDC.

IDC's Preliminary U.S. PC Vendor Unit Shipment Estimates for 2Q10 (Thousands of Units)
Neither Gartner nor IDC saw Apple break into their top 5 vendors for worldwide shipments, where Gartner sees Toshiba holding down the fifth spot with 5.1% share and IDC has Toshiba and Asus in a virtual tie at 5.3% at the bottom of its list.
[ 107 comments ]

Tuesday January 18, 2022 10:35 am PST by Juli Clover
Verizon and AT&T's upcoming rollout of new C-Band 5G technology could cause chaos and lead to widespread delays of passenger and cargo flights, major U.S. airlines said on Monday in a letter sent to the White House National Economic Council, the FAA, and the FCC (via Reuters). "Unless our major hubs are cleared to fly, the vast majority of the traveling and shipping public will essentially...
Read Full Article • 177 comments