The iPad has been available in the U.S. for nearly two months now and is officially rolling out to nine more countries this Friday. At its U.S. debut, about 2,000 iPad-specific apps were available in the App Store and this number has since swelled to over 7,000 with more arriving every day. Here are a few notable ones that have been released over the past couple of weeks.

Avatron Software, the makers of the Air Sharing HD document sharing app, recently released a new app, Air Display, that turns an iPad into an extra external display. In order to work, the app requires a desktop companion application - which is available for Macs running OS 10.6 only for now though a Windows version is coming and for the Mac and the iPad to be on the same Wi-Fi network.


Set-up is pretty easy and we found that the app works as advertised, though video lags a little behind the accompanying audio and it's probably best suited for more static items such as Inspector windows, iChat buddy lists and the like. Youre also not restricted to using your computers mouse to navigate the display on the iPad you can use its multi-touch display to click links and buttons. To enter text, youll need to use your computers keyboard since the iPads virtual keyboard wont pop up when you get to a text field.

For $9.99, turning your iPad into a extra display is pretty cheap compared to buying a dedicated display and this app could be invaluable for laptop users who need a little more screen real estate while on the go.

ALK Technologies, the developer of GPS applications for a wide variety of mobile devices, was the first to put out a turn-by-turn navigation app specifically for the iPad. CoPilot Live HD North America debuted in the App Store earlier this month and it's priced aggressively relative to other GPS apps at $29.99. We've been trying it out and it is a joy to have navigation guidance on such a large screen, though we wish there was a setting to let the map take over the majority of the screen and force the next turn guidance section to be smaller. 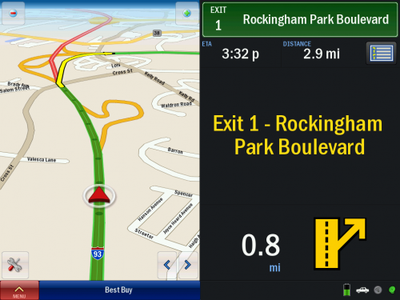 CoPilot Live HD will work only on iPads with 3G connectivity since these models possess a GPS receiver while the Wi-Fi only models do not. Additionally, this version of the app works only on the iPad and not the iPhone, though ALK Technologies does offer CoPilot Live North America specifically for the iPhone, priced at $19.99.

BeejiveIM has been one of our favorite IM apps for the iPhone and the company put out an iPad-speciic version of the app just a few days ago. BeejiveIM for iPad lets you set up multiple IM accounts under the most popular instant messaging protocols used today and offers push notifications to let you know about incoming messages even when the app is closed. It also lets you send images and voice notes as attachments to your instant messages.

BeejiveIM for iPad is available at an introductory sale price of $5.99 right now for a limited time only.