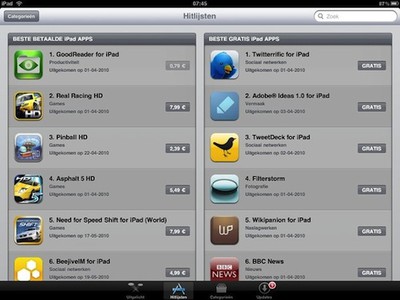 As noted [Google translation] by German site Macerkopf.de and expanded upon by Engadget, Apple has begun activating international iPad App Stores ahead of the device's launch in those countries: Australia, Canada, France, Germany, Italy, Japan, Spain, Switzerland and the UK. In fact, stores appear to be going live even in countries that are not included in this round of device launches. Engadget notes that things appear a bit unstable at the moment as Apple works to get everything up and running for the new markets, but should stabilize in time for the official iPad launch later this month.

Apple began taking pre-orders for all iPad models in the nine new countries early last week, with the device scheduled to launch in those countries on May 28th. Recent data from Yahoo showed approximately 10% of iPad users accessing its network of sites coming from outside the United States, suggesting that a significant number of devices have made their way out of the initial launch country.