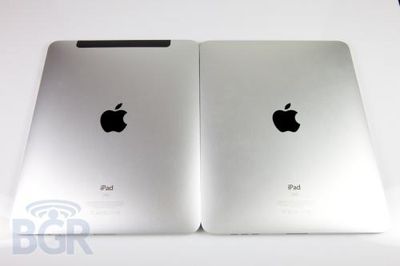 Comparison of Wi-Fi + 3G (left) and Wi-Fi (right) iPad models (Source: BGR)
Pre-orders of Apple's iPad Wi-Fi + 3G models have been arriving around the United States this morning, and a number of users have been putting together unboxing galleries featuring the new devices. Both iLounge and Boy Genius Report have posted extensive galleries of their own, offering a number of shots of the packaging, accessories, iPads, and setup screens.

iPad Wi-Fi + 3G with micro-SIM tray ejected (Source: iLounge)
Of note, iLounge reports that the 3G-capable models come shipped in the exact same style of box used for the Wi-Fi-only models released earlier this month with the addition of two stickers on the rear of the box listing the capacity and 3G nature of the contents.

The box the 3G model comes in is identical to that of the Wi-Fi-only model, save for two stickers on the back of the box that reference the fact that a 3G model is contained within; notably, the image of the iPad on the front does not depict the 3G model.

As with the Wi-Fi-only iPad, users must connect the device to iTunes before using.