In a report published late last week and gaining significant attention today, MOTO shares the results of some simple testing conducted on the iPhone, Motorola Droid, HTC Droid Eris, and Google Nexus One, assessing the accuracy of the touchscreens on the devices. According to the study, the iPhone's touchscreen performs relatively well, offering precise straight-line tracking under both light and medium pressure, although it does exhibit loss of sensitivity at the screen's edges.

In comparison, the Droid Eris and Nexus One, which share a touch controller chip, perform well under medium pressure, including at the edges, but falter somewhat under light pressure. Motorola's Droid, however, exhibits significant waviness and "stairstepping" under both light and heavy pressure, indicating inaccuracies in the tracking process. 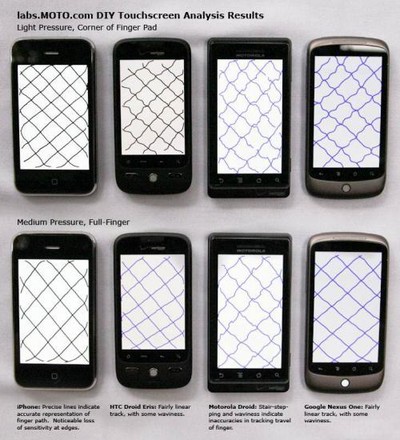 The testing procedure simply involves installing a drawing program on the device and then slowly tracing straight lines across the device's screen to assess how well the system is able to track finger movements.

MOTO has also published a video demonstrating how the testing was performed, although the video shows an original iPhone while the presented results include a newer-generation iPhone. The Nexus One is also not included in the video presentation, as it was unavailable for the initial round of testing.