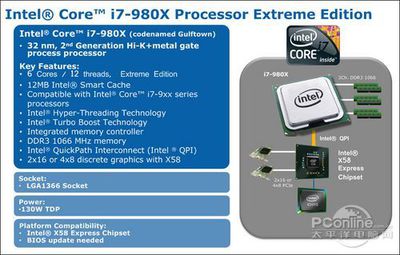 Chinese site PCOnline.com.cn (via HardMac) leaked details about the upcoming Gulftown 6-core processor that is expected to be used in Mac Pros in early 2010. The processor has been previously referred as the Core i9, though it seems it will instead be designated an extreme (X) Core i7.

The slide confirms that the new processor will be based on a 32nm process with 6 cores and 12 threads. This means a dual configured Mac Pro will have 12 physical cores and 24 logical cores. Also revealed is that the processor will reach a frequency of 3.33GHz. This new 6-core processor should arrive by March 2010, giving a possible timeframe for the next Mac Pro refresh.