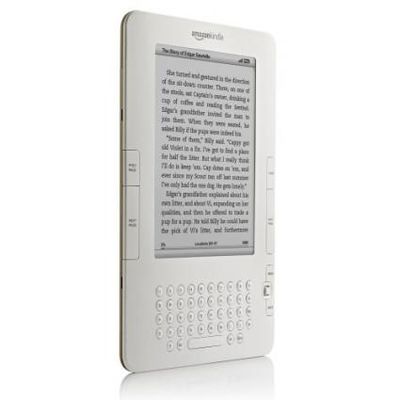 The big non-Apple tech news yesterday was Amazon's announcement of the Kindle 2. The Kindle was Amazon's first entry into the gadget market with an electronic book reader that was described as "the iPod of reading". The original Kindle offered sales of eBooks over the air through a wireless EVDO connection without a monthly contract.

The new Kindle has made a number of steady improvements over the original design. Features include:

The new Kindle will cost $359 and ship on February 24th with pre-orders starting now.

With the introduction of the original Kindle, some Apple customers have hoped that Apple might also enter the eBook market. Jobs dismissed that possibility in early 2008 when asked about the Kindle:

Meanwhile, the iPhone may have inadvertently become the largest eBook reader with the introduction of various eBook apps through the iTunes App Store.

The main issue with these free iPhone readers, however, has been the lack of premium content (new releases) that is found on the Kindle. In the future, there may be more synergy between the technolgies as Amazon also announced last week that they would be working to make Kindle books available "on a range of mobile phones", leading some to believe that the iPhone could someday gain access to Amazon's digital library.