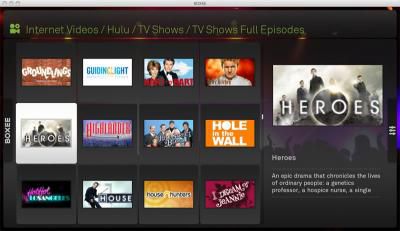 Boxee.tv has announced that they are offering Hulu.com, CBS.com and Comedy Central streaming support into their media management application.

Boxee is a free personal media application that is installable on your Apple TV. Boxee provides your Apple TV with playback support for a wide variety of media types across local networks and the internet. While the process has been simplified, installing Boxee on your Apple TV still requires a multi-step process involving a bootable USB flash drive. Their latest announcement, however, may push some into giving it a try.

Hulu and CBS both offer full streaming episodes of popular television shows. Many of the same episodes are available for purchase on iTunes. Hulu is backed by NBC Universal and is the industry's response to both YouTube and iTunes content. Boxee also coexists with the default Apple TV software which can still be used.

The software is still considered to be in "alpha" so readers should proceed with caution, however, Apple TVs can be easily reset to factory default settings. Our existing invitation thread can be used to ask for invites to the service -- any Boxee user can invite an unlimited number of individuals.

Monday September 26, 2022 6:23 am PDT by Sami Fathi
iPhone 14 Pro customers on the Verizon network in the U.S. are reporting issues with slow and unreliable 5G cellular connections and calls randomly dropping. Several threads on Reddit (1,2,3) and the MacRumors forums chronicle issues faced by Verizon customers and Apple's latest iPhone. According to user reports, signal strength on the iPhone 14 Pro is unreliable and weak, while other...
Read Full Article • 163 comments