Steve Ballmer on Microsoft Surface at All Things Digitial

Steve Ballmer, CEO of Microsoft, is being interviewed at the Wall Street Journal's All Things Digital conference this morning. Ballmer discussed and demoed Microsoft Surface, a multi-touch table that was introduced earlier today. 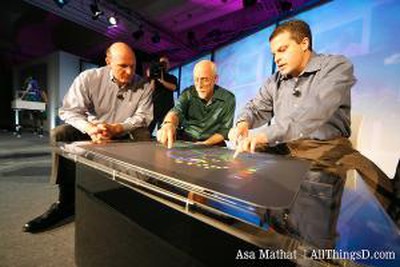 Walt Mossberg addresses similarities with the technology to the Apple iPhone:

Walt notes Surfaces user-interface similarities to Apples iPhone and some new HP devices, and wonders about intellectual-property issues. Were confident in our IP, says Pete Thompson, general manager of Microsoft Surface Computing. And, he adds, multitouch has been around for a long time.

Microsoft plans thin-panel versions, vertical displays, and other form factors for the technology.

Mossberg also asks "if Microsoft will stick with Zune, given the seemingly impossible task of catching up to Apples iPod", to which Ballmer stated "We're firmly behind Zune." Meanwhile, Ballmer denies that Microsoft will ever develop a Phone.

Wednesday June 16, 2021 7:11 am PDT by Hartley Charlton
With no sign of redesigned MacBook Pro models at this year's WWDC, when can customers expect the much-anticipated new models to launch? A number of reports, including investor notes from Morgan Stanley and Wedbush analysts, claimed that new MacBook Pro models would be coming during this year's WWDC. This did not happen, much to the disappointment of MacBook Pro fans, who have been...
Read Full Article • 226 comments

Wednesday June 16, 2021 10:49 am PDT by Juli Clover
Apple CEO Tim Cook this morning participated in a virtual interview at the VivaTech conference, which is described as Europe's biggest startup and tech event. Cook was interviewed by Guillaume Lacroix, CEO and founder of Brut, a media company that creates short-form video content. Much of the discussion centered on privacy, as it often does in interviews that Cook participates in. He...
Read Full Article • 311 comments

Thursday June 17, 2021 7:33 am PDT by Joe Rossignol
Apple today lowered the prices of AppleCare+ plans for MacBook Air and 13-inch MacBook Pro models equipped with the M1 chip. Coverage offered by the plans, as well as accidental damage fees, appear to remain unchanged. In the United States, AppleCare+ for the MacBook Air now costs $199, down from $249. The new price applies to both M1 and Intel-based MacBook Air models, although Apple no...
Read Full Article • 127 comments