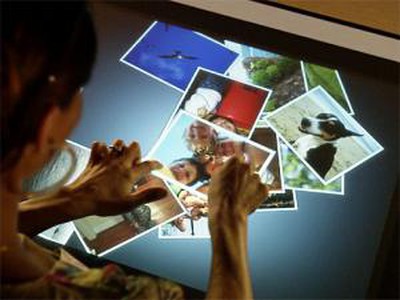 The included video includes an interview with Jeff Han, well known for his multitouch demos. Microsoft's solution appears to have significant improvements with wireless interfaction with physical objects.

Gattis took out a digital camera and placed it on the Surface. Instantly, digital pictures spilled out onto the tabletop. As Gattis touched and dragged each picture, it followed his fingers around the screen. Using two fingers, he pulled the corners of a photo and stretched it to a new size. Then, Gattis put a cellphone on the surface and dragged several photos to it just like that, the pictures uploaded to the phone. It was like a magic trick. He was dragging and dropping virtual content to physical objects. I'm not often surprised by new technology, but I can honestly say I'd never seen anything like it.

The initial plans for the device are commercial ($5,000-$10,000) tables not intended for home users. "People will see it in public spaces like bars and restaurants and want to expand it into other environments."

Apple has incorporated Multi-Touch into the iPhone, which is expected to be launched at the end of June.

Update 2: Another Video from CNet.

O and A
another unoriginal product from msft.
Score: 1 Votes (Like | Disagree)

And theres also that one multitouch video that everybodys already seen,
Score: 1 Votes (Like | Disagree)
Read All Comments

Tuesday August 3, 2021 7:34 am PDT by Joe Rossignol
Apple today began offering new high-end graphics upgrade options for both the tower and rack versions of the Mac Pro desktop computer. This comes on the same day that Apple started selling the Magic Keyboard with Touch ID on a standalone basis. As noted by CNN Underscored's Jake Krol, the Mac Pro can now be configured with new AMD Radeon Pro W6800X, W6800X Duo, or W6900X graphics when...
Read Full Article • 113 comments