I often work away from home, and occasionally abroad, so I'm always looking for ways to slim down the number of chargers and cables I need to pack alongside my 13-inch MacBook Pro to see me through the trip. I've used global travel adapters with USB ports in the past, but nothing quite like Zendure's just-launched Passport II Pro, which I've been trying out at home for a few weeks now. 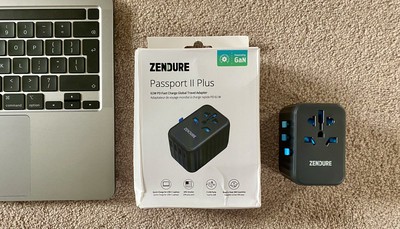 This 61-watt GaN USB-C travel adapter is an evolution of Zendure's popular Passport, the world's first travel adapter with an auto-resetting fuse. That device was followed by the 30-watt Passport Pro, which introduced GaN technology and the ability to charge a tablet and an additional four devices.

The Passport II Pro goes one better, however, as it's the world's first 61-watt GaN travel adapter with 5-USB ports and an auto-resetting fuse. Judging by Zendure's highly successful Kickstarter campaign, this adapter is drawing a lot of interest, so let's take a closer look at what it can do.

The first thing that caught my eye about the Passport II Pro was the side-mounted 61-watt USB-C port, which packs enough power to charge a 13-inch MacBook Pro. Apple's charging plugs have never been particularly compact, but the UK variant that comes with the 13-inch MacBook Pro is particularly bulky and not a great shape to pack.

By contrast, the Passport II Pro is more compact and several grams lighter than the Apple UK plug (170 grams versus 225 grams). That's thanks to Zendure's use of GaN technology, which means the adapter can deliver enough power to a notebook without increasing bulk. (Zendure claims a 20 percent reduction in size compared to the Passport GO, although it is a few grams heavier.)

The adapter's slot-loading plug is compatible with sockets in over 200 countries, including the US, UK, Europe, Canada, Japan, Mexico, Asia, the Middle East, and more.

Meanwhile the adapter's front-facing plug slots offer the same compatibility and let you charge a sixth device. They're also protected by a child-proof shield to prevent them from sticking stuff into the socket. You can insert three-prong plugs into the PassPort Pro II, but the middle plug won't be grounded. It also works with polarized plugs, but Zendure says to make sure the device is double-insulated before doing so.

The Passport II Pro doesn't convert voltages up or down, but most modern electronics have no problems running between 100V and 250V, and I had no issues with anything I plugged into it. That said, always check before connecting something.

The auto-resetting fuse cuts power to connected devices in the event of a power surge, and then reactivates within a minute to continue charging. The fuse has also been increased to 10 amps, where previous adapters had just 6 amps, so it's able to power many high-power devices like hairdryers and electric kettles.

The build quality of the Passport II Pro is nice and solid, and feels like it would stand up well to knocks when stowed. I also found the sliders that switch out the slot-loading plug pins easy to use.

Extending more than one combination of pins out is impossible by design, as you can't move the sliders if one set of pins is already protruding. You also have to press down on the sliders slightly to get them moving, so they stay securely stowed inside the adapter chassis when not in use.

The front-facing socket holes accepted all the plug types I tried inserting, and I didn't have to force any of them in to get past the child-proof shield, which isn't something that can be said for other universal plug adapters I've used.

The size and shape of the adapter makes it easy to plug and remove from sockets, and it's much more amenable to packing than the Apple 13-inch MacBook charger, which I think is a big win.

It's a shame the same can't be said for the row of USB ports on the bottom of the chassis. When used with a U.K. socket, the location of these ports can make plugging in USB cables difficult without completely unplugging the adapter, and the tiny LED that indicates USB charging status isn't really visible. Other travel adapters mount USB ports along the top, making them easier to work with, at least when I've used them at home. Your experience may differ depending on the region and socket standard.

Using the Power Delivery port on its own, I was able to fully charge my 2020 13-inch MacBook Pro in a little over two hours, which is the same speed I can get from Apple's charger. This time increased to just over three hours when I also plugged in a 12.9-inch iPad Pro, Apple Watch, AirPods Pro, Sony WH-1000XM3 headphones and an iPhone 11 Pro all at the same time, which is pretty impressive. When I stopped using the Power Delivery port, the surplus power was redistributed to the other USB ports and all the accessories I had plugged in got an expected charging boost.

The Passport II Pro is a well-engineered evolution of Zendure's earlier products, and charged everything I threw at it at home, 13-inch MacBook Pro included, without breaking a sweat. Apart from the underside location of four of the available five USB ports, there's very little not to like here.

The GaN charging is a boon, the "Press and Slide" one-handed operation works well, the mix of USB-C and USB-A ports offers flexibility, and it's all housed in a compact and ergonomic industrial design. Altogether, the Zendure Passport is the best travel adapter I've used so far, and I'm looking forward to taking it abroad with me when that becomes possible again.

The Zendure Passport II Pro is already being mass produced and scheduled to ship next month. The adapter is available in black or white, and can be pre-ordered on the Kickstarter page for $45, which includes a 35 percent discount off the retail price, after which it will be available to buy on the Zendure website for $69 with worldwide shipping.

Note: Zendure provided the Passport II Pro for the purposes of this review. No other compensation was received.

Every time I see UK and EU plugs I feel bad for them using such a massively bulky plug. It's impossible to make anything that plugs in tiny without doing crazy tricks because the plug has to physically be so big!

I do bet they have a lot less trouble with overloaded plugs cooking in an outlet, though. Those pins are freaking BEEFY.

UK plugs have a number of safety features that contribute to their size.

Apple_Robert
But, i need 1.21 gigawatts of power.
Score: 1 Votes (Like | Disagree)
Read All Comments

Saturday April 17, 2021 4:43 am PDT by Sami Fathi
Reliable leaker known as l0vetodream has hinted that Apple may debut its rumored redesigned and colorful iMac at its "Spring Loaded" event on Tuesday, April 20. In a tweet, the leaker posted an image of Apple's logo used for marketing the upcoming event and an image of the retro rainbow Apple logo alongside the colorful lineup of G3 iMacs. Apple leaker Jon Prosser previously reported that...
Read Full Article • 281 comments

Monday April 19, 2021 6:37 am PDT by Hartley Charlton
Apple is planning to launch a new entry-level iPad, iPad mini, and iPad Pro at its "Spring Loaded" event tomorrow, along with "a few surprises," according to Wedbush analysts. In a new note to investors, seen by MacRumors, Wedbush analysts Daniel Ives and Strecker Backe explained that the iPad will be the main focus of Apple's "Spring Loaded" event, with new entry-level iPad, iPad mini, and ...
Read Full Article • 181 comments

Monday April 19, 2021 11:30 am PDT by Juli Clover
The upcoming 12.9-inch iPad Pro will be thicker than the previous-generation version, likely due to the inclusion of the mini-LED display. We've heard several rumors about the change in thickness, and now leaked design images have confirmed it. A source that designs accessories for Apple devices sent MacRumors a series of photos that feature exact dimensions for the new iPad Pro models, and...
Read Full Article • 217 comments

Monday April 19, 2021 7:51 am PDT by Sami Fathi
Following the removal of the app in January, Apple will now allow the social media app Parler to return to the App Store following changes to how the social media network moderates content, CNN reports. On April 14, in a letter to Sen. Mike Lee and Rep. Ken Buck obtained by CNN, Apple said that the app has improved the way it moderates content, and says those changes are "sufficient" for it...
Read Full Article • 254 comments