Ultimate Ears today added to its speaker lineup with the launch of the UE Roll 2, a successor to the original UE Roll. The UE Roll 2 looks like the current version of the UE Roll, but it has been upgraded with a longer Bluetooth range and louder sound. 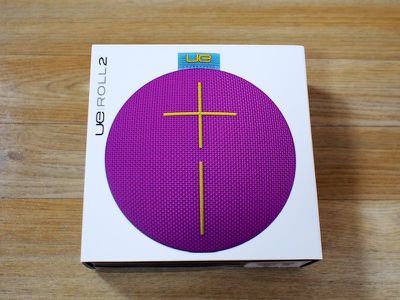 I own an original UE Roll, so Ultimate Ears sent me a UE Roll 2 for a comparison review ahead of the new speaker's rollout. When it comes to design, the palm-sized UE Roll 2 is physically identical to the original UE Roll. It features the same flat, circular design with a bungee cord in the back and a flap to cover both a microUSB port used for charging and a 3.5mm audio-in jack.

Original UE Roll on left, UE Roll 2 on right
The UE Roll 2 isn't the most portable speaker out there due to its size (it's not going to go in a pocket), but because it's flat, it fits well in a purse or a backpack. It weighs about a half pound, so it's not going to add a lot of weight if you need to travel with it, and with the stretchy bungee cord, you can attach it just about anywhere.

Original UE Roll on left, UE Roll 2 on right
The UE Roll 2, like the original UE Roll, comes in a range of bright colors and it features a "life-resistant" shell that's waterproof and dust proof. It has an IPX7 rating, so it's waterproof for up to 30 minutes at a depth of one meter. The UE Roll 2 successfully survived being submerged for an extended period of time and it also made it through several shower trips. Since the UE Roll 2 is essentially weatherproof and impact resistant, it's ideal for backpacking, hiking trips, the beach, and other outdoor activities.

The UE Roll 2's build quality is the same as the first UE Roll, and I can vouch for its durability. I've had my original UE Roll for about six months and it's been in the shower most of those days with no ill effect. The UE Roll 2 even ships with a little floatie device in the package, which can be used to float the UE Roll 2 in a pool or a bathtub.

As for sound quality, I prefer the UE Roll 2 (and the original UE Roll) to all of the other similarly priced (and similarly sized) speakers I've owned like the Jawbone Jambox and mini Jambox, the Boombot Rex, and the Oontz Angle. The sound projection is better, it sounds clear and crisp, and there's little distortion even at max volume.

The UE Roll 2 has a longer Bluetooth range than the UE Roll, so it doesn't need to be as close to an iPhone or iPad. While the original UE Roll had a range of 65 feet, the new one has a range of 100 feet. The battery life in the UE Roll 2 is unchanged -- it'll last for nine hours on a full charge which is long enough for a full day's use or multiple days with occasional use.

Connecting the UE Roll 2 to an iPhone is a simple process that takes just a few seconds, done through the Bluetooth menu in the iPhone's settings app. Once connected, it'll play whatever's playing through the iPhone, and there's also a UE Roll app that goes along with it.

The UE Roll app is nifty because it allows you to link two UE Roll 2 speakers together with both streaming from the same source (Double Up) or set it up so it'll play songs from multiple iPhones, so everyone at a party can choose the music (Block Party).

There's also an option to adjust the equalizer and a feature for using the UE Roll 2 as an alarm clock to play music from an iPhone. The UE Roll app is also used for firmware updates, monitoring battery life, controlling volume, and turning the speaker on and off.

There are few negatives to the UE Roll 2, but it's worth noting that it doesn't include speakerphone functionality, and unlike the UE Boom 2, there are no built-in features for pausing music or skipping to the next song.

As someone who uses a UE Roll on a daily basis, I can recommend the UE Roll 2 to anyone looking for a colorful waterproof speaker that also puts out a lot of sound. I've used mine in the shower for several months now and it's still as good as new.

The UE Roll 2 is ideal for the shower, the pool, or the beach, but it puts out good sound even if you don't want to take advantage of its water resistance, and in my opinion, it's a good looking little speaker.

The UE Roll 2 can be purchased from the Ultimate Ears website for $99.99 starting today.

Note: Ultimate Ears provided a UE Roll 2 to MacRumors free of charge for the purposes of this review. The original UE Roll was purchased by the author. No other compensation was received.

Must get a few of these for the pews in the local church. They would fit in very nicely indeed. Useful for the hard of hearing to listen to their sermon I guess

And with a crucifix up front and center on the top of this thing, you're all set.
Score: 2 Votes (Like | Disagree)

Whatever it is, that's one good looking piece of speaker right there! I love the design.
Score: 1 Votes (Like | Disagree)
Read All Comments