Review: Ultimate Ears' Newly Announced BOOM 3 and MEGABOOM 3 Speakers Are Its Best Yet

Compared to previous-generation speakers, the BOOM 3 and MEGABOOM 3 use new two-toned high-performance fabric that's ultra tough and was originally designed for purposes like motorcycle jackets and fire equipment. 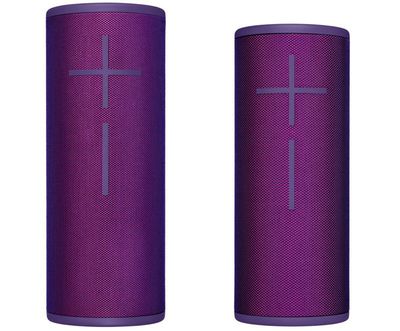 The speakers also include a new Magic Button at the top of the enclosure for easier access to music controls, while MEGABOOM 3 comes equipped with deeper bass thanks to new passive radiators.

We were able to check out the new MEGABOOM 3 ahead of its debut, and we were impressed with its fresh design and the new controls that Logitech has implemented. The new two-tone fabric looks fantastic, and the overall design of the speaker is much sleeker because the rubber strap that's normally at the front has been relocated to the back. This also gives more surface area for the sound, for better 360 degree audio.

We checked out the red version of the speaker, which is vibrant and eye catching, but it also comes in black, blue, and purple. Apple will also be selling two exclusive BOOM 3 and MEGABOOM 3 colors: cloud, a light blue, and denim, a darker blue shade. It's worth noting that the new fabric the speaker is made from adds better resistance to dust, increasing its water resistance and ingress rating to IP67.

MEGABOOM 3 and BOOM 3 will hold up to liquids and can be used at the beach, at the pool, in the rain, and in other similar conditions. This year, the speakers float, so you can stick them right in the pool to listen to music while you swim. Ultimate Ears does water resistance right and we've never seen issues with the speakers in wet conditions.

With the new look, the "+" and "-" buttons blend right into the fabric of the speaker for a more subtle design, and, most importantly, the update relocates the micro-USB to the back of the device instead of the bottom so it's now possible to charge while the speaker is upright and in use.

Both the MEGABOOM 3 and BOOM 3 are compatible with the $40 Power Up charging dock that Ultimate Ears launched last year, which lets you charge the speaker inductively so you don't need to fuss with a cable and the micro-USB port.

While the MEGABOOM 3 and BOOM 3 look great, it's the addition of the Magic Button that boosts their utility above and beyond previous-generation Ultimate Ears speakers.

Paired with the new Ultimate Ears BOOM app, the Magic Button allows the MEGABOOM 3 and BOOM 3 to work with playlists for the first time. From Apple Music, you can import up to four playlists. You can include self-created playlists or those that Apple creates, such as New Music Mix and Chill Mix.

Playlists can be played automatically using the Magic Button. A long press will activate your Playlists, while a second long press will skip to the next playlist. This is useful if you have different playlists you want to access at a party or while at the beach or in the pool but don't have your iPhone handy.

The Magic Button also offers full controls for other purposes. Pressing it turns the speaker on, while a second press will pause. A double press will skip to the next song.

You can set up four playlists using the BOOM app, which is required to use the playlist feature. On iOS devices, it works with Apple Music and pulls content from your music library, recommendations from Apple, and preset playlists you've created. The playlists feature is limited to Apple Music, so it unfortunately won't work with Spotify at this time.

On Android, though, it does work with Deezer Premium, and Ultimate Ears says that additional music services will be added in the future.

You can, however, still play music from Spotify or any other music service from the iPhone over the Bluetooth connection to the speaker. The BOOM app also offers full music controls and the ability to turn the speaker on and off, plus it offers an equalizer for adjusting bass, mid, and treble to preferred levels.

The app also provides access to key features Ultimate Ears speakers are known for like PartyUp for linking up to 150 speakers together and Block Party for allowing multiple people to stream content to the MEGABOOM 3 or BOOM 3.

Ultimate Ears says that both the MEGABOOM 3 and BOOM 3 have been upgraded with enhanced Bluetooth range up to 150 feet, and that longer range support was evident in our testing compared to previous-generation Ultimate Ears speakers.

Ultimate Ears' speakers always sound great, and while no improvements have been made to the sound quality of the BOOM 3, the MEGABOOM 3 has noticeably deeper bass through the inclusion of new passive radiators.

We weren't able to test the BOOM 3's sound, but the MEGABOOM 3 sounds even better than previous-generation Ultimate Ears speakers.

The new MEGABOOM 3 and BOOM 3 will be available for purchase starting in September in the United States and select countries in Europe and Asia.

Note: Ultimate Ears provided MacRumors with MEGABOOM 3 for the purpose of this review. No other compensation was received.

Note: Ultimate Ears provided MacRumors with MEGABOOM 3 for the purpose of this review. No other compensation was received.

This seems a little weird. It merges objective reporting on a product announcement with an opinion piece describing how much the author likes (or doesn't like) the speakers.

Casaron
That design would look good in church!
Score: 7 Votes (Like | Disagree)

RightMACatU
With evvvvery new release we get the same comments on how much it looks like a cross, belongs in a church, etc... God I'm tired of those.

I really want one, they are great for the beach.
But won’t buy any devices with a micro USB port, not in 2017 and definitely not in 2018.

Should have been lightning or usc c.
Score: 3 Votes (Like | Disagree)

That design would look good in church!

“MEGABOOM 3 Christian edition” (it kind of looks like a science fiction sarcophagus) ;)
Score: 3 Votes (Like | Disagree)
Read All Comments

15 hours ago by Joe Rossignol