This month Twelve South launched a new accessory for the iMac, ‌iMac‌ Pro, and external displays, called the "Curve Riser." Similar to its HiRise products, the Curve Riser elevates your ‌iMac‌ to a position that's supposed to be more ergonomic for most users, while also providing some storage underneath the ‌iMac‌. 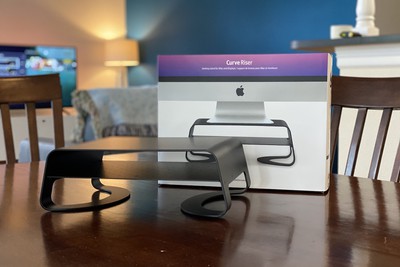 From a materials standpoint, the Curve Riser matches Twelve South's established standard as a premium accessory maker; it's built from a sleek metal and only comes in black. There's no front or back door, and although the accessory has a far bigger footprint than any ‌iMac‌ stand I've owned (coming in at 9 by 12 inches), its design is airy, sleek, and unobtrusive.

The idea behind ‌iMac‌ stands like the Curve Riser is that Apple's desktop computer (and most fixed-height computers) aren't naturally ergonomic. If you provide a little bit of height to your setup, ideally with the top of your display hitting your eye level, you can sit with a straight back and keep all of the display in your vision without any awkward neck tilts.

Twelve South's original (and now discontinued) HiRise for iMac was my first go-to ‌iMac‌ desk stand, and it provided a few different height levels, perfect for finding my favorite position. In recent years I transitioned to Satechi's Type-C Stand, which despite offering only one height option, provided a great selection of easily accessible front-facing ports.

The difference in height between Satechi's accessory and the Twelve South Curve Riser has been so drastic that I've barely gotten used to the Curve Riser over the past week, and I'm not sure that I should. The Satechi stand sits about 1.63 inches tall, which isn't a lot, but ultimately provided me with just the right eye level for my ‌iMac‌.

Twelve South Curve Riser (left) and Satechi Type-C ‌iMac‌ Stand (right)
At 4.2 inches tall, the Curve Riser is simply too tall for me. I frequently have to tilt my head up and down when I work and move to different parts of the ‌iMac‌ display, with my eyes hitting just about the middle of the display when sitting tall. I have an adjustable desk, so there is some wiggle room to knock my ‌iMac‌ down lower, but not much.

This height will work for some users who are taller than me, but the inability to truly customize the exact height of the accessory is a let down at this $79.99 price point. Although Satechi's Type-C Stand is also a fixed height, it feels far more universal at just over an inch off the desktop and could easily hit the ergonomic sweet spot of more individuals than the Curve Riser.

The same goes for Twelve South's previous HiRise device, and the current HiRise Pro, which offers adjustable shelving heights at a far higher price of $169.99.

I've also seen concern over ‌iMac‌ stability when using a stand like this, but I've never had such issues or been worried about my ‌iMac‌ toppling over with any ‌iMac‌ stand, the Curve Riser included. The accessory has such a large footprint at twelve inches wide that there's plenty of space for the ‌iMac‌ base to sit atop the stand.

Given the weight of the ‌iMac‌ and the wide footprint of the Curve Riser, everything feels nice and sturdy once it's set up. Even in spaces of frequent traffic surrounding a desk, I couldn't really see anyone needing to worry about the ‌iMac‌ toppling off of the Curve Riser.

The new Curve Riser is also built to match the aesthetics of Twelve South's Curve and Curve SE for the MacBook, another ergonomically-minded accessory that lifts your Apple notebook into the air by about 6 inches.

The Curve for MacBook and Curve Riser
Another benefit of the Curve Riser is the desktop organization it offers with its small shelf, which measures 10 inches wide, 9.6 inches deep, and about 1.75 inches tall. This capacity can hold a Mac mini, various USB hubs, hard drives, your wallet, and more.

The shelf is certainly wide enough to hold quite a few items, making it a helpful tool to get a few pieces of clutter off of your desk. Still, the benefits of having a slight organization system don't quite outweigh the loss of adjustable height, which will hinder the accessory's usefulness for the majority of people.

The Curve Riser is available on Twelve South's website for $79.99.

Note: MacRumors is an affiliate partner with Twelve South. When you click a link and make a purchase, we may receive a small payment, which helps us keep the site running.

Cryates
$80...for that? There are better solutions to be found at lower prices.
Score: 12 Votes (Like | Disagree)

ComRadMac
Except, of course, raising your monitor is incredibly un-ergonomic. Ergonomics say to have the monitor lower so you're looking down into it. Tilting your head back at all is one of the worst positions you can be in while sitting and working for long periods.

No actual ergonomic expert would claim this is more ergonomic. It's actually much worse for you, in almost every situation.
Score: 8 Votes (Like | Disagree)

swm
no way. if you have kids or pets (cats) and your iMac is not against the wall, it's in danger already. i actually manufactured clamps to secure it to the desk. placing the computer on top of a thin metal construction is just asking for trouble.
Score: 7 Votes (Like | Disagree)

dogslobber
A hardback book is a cheaper solution. I use a Windows book about 4" thick.
Score: 7 Votes (Like | Disagree)

4jasontv
Twelve South makes the most beautiful things I could never see myself using.
Score: 6 Votes (Like | Disagree)
Read All Comments

Friday February 26, 2021 1:32 pm PST by Juli Clover
SwitchEasy recently came out with a series of "MagEasy" accessories that are designed to add MagSafe compatibility to older devices or to iPhone 12 cases that aren't equipped with built-in magnets. The MagDoka is a circle-shaped magnetic ring that attaches to an iPhone or an iPhone case using adhesive. At 2mm in thickness, the MagDoka doesn't add a lot of bulk to an iPhone, and in my...
Read Full Article • 28 comments

Thursday August 6, 2020 9:59 am PDT by Juli Clover
The 2020 27-inch iMac was announced earlier this week with updated 10th-generation Intel chips, new AMD 5000 graphics, a True Tone display, and an improved webcam, but unfortunately, the machine features no design changes. Apple began shipping iMac orders out earlier this week, and as the new devices arrive to customers, media sites have also released their own reviews. Many of the reviews...
Read Full Article • 147 comments

Thursday May 20, 2021 6:05 am PDT by Joe Rossignol
The embargo has lifted on reviews of the new Apple TV 4K, a fairly minor refresh to the streaming box with an A12 chip for faster performance and a redesigned Siri Remote with a new clickpad for five-way navigation. Most customers will begin receiving their new Apple TV 4K this Friday, and ahead of time, we've rounded up reviews and unboxing videos below. Andru Edwards said the new Apple...
Read Full Article • 155 comments