iPhone and Mac accessory maker Scosche in 2019 came out with a novel all-in-one charging solution, the BaseLynx, which is a modular charging system that can be customized for the devices that you have. 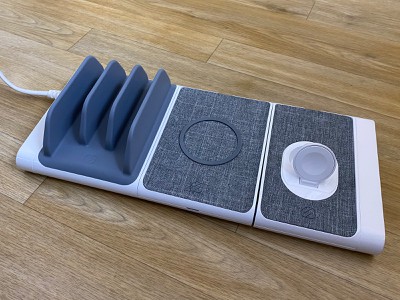 Scosche sells its BaseLynx in Apple retail stores, offering two modular kits along with add-ons that let it be set up to charge the Apple Watch, ‌iPhone‌, iPads, and more. Individual pieces are priced starting at $40, while full charging kits go for $149 to $199.

Because the setup is modular, you can purchase chargers just for the devices that you own. If you have an Apple Watch and an ‌iPhone‌, for example, you can get just those chargers, but if you have an iPad, you can add a USB-C endcap or a vertical charging station.

It's customizable to your setup, and individual pieces are reasonably priced for the most part, though some are a little more expensive than you might pay for a standalone charger from another company. Basically the pieces are on the higher end of average prices for individual charging components.

Scosche offers the Apple version of the BaseLynx in an exclusive white and gray color, while the version sold on the Scosche site comes in black. Scosche sent me the standard charging kit, which includes an MFi-certified Apple Watch charger, a 7.5W Qi-wireless charging pad, and a vertical charging station that can charge three devices at once.

Each piece of the BaseLynx is made from a white plastic material with gray accents, and the pieces snap together and can be arranged in different configurations. Size wise, the charging components are a bit big and this setup is going to take up a lot of desk space. I would have liked to see less superfluous plastic around the border and on the pieces in general, because slimming some of the components down would have saved a lot of surface area.

The Qi-based wireless charging pad offers 7.5W of power, so it can charge an ‌iPhone‌ at the maximum wireless charging speed. Wireless charging is best for charging at night or during the day when you don't need your phone because it's slow. Expect to get around 25 to 40 percent battery over the course of an hour depending on the temperature conditions and which ‌iPhone‌ you have (larger batteries like the ones in the iPhone 11 line are going to take longer). I liked the gray fabric of the charger and my ‌iPhone‌ (and AirPods) stayed securely in place when charging.

For the vertical charging station, there are three gray rubber sections to hold your devices, along with two 12W USB-A ports and one 18W USB-C port. More and more devices use USB-C these days, so I would have preferred to see two USB-C ports rather than two USB-A ports. That may not be the case for everyone, but even for the ‌iPhone‌, I prefer USB-C to Lightning over the slower USB-A charging. The slots are big enough to fit a device as large as the iPad Pro or even a MacBook Pro, but since this charges at a maximum of 18W, it's best used with iPhones, iPads, and similar sized devices like the Nintendo Switch.

In testing, all of the ports and the charging surfaces worked as expected, and I ran into no unexpected problems with the setup. I only had a few components, but there is an option to add on more. It's a bit confusing, though, because Scosche doesn't make it super clear how many modules can fit together.

Each component is assigned a point value, and a single power cord can support 15 points. For reference, an Apple Watch charger is one point, the Wireless Charging Pad is two points, an EndCap is three points, and the vertical charging station is five points. The setup that I have here to test is a total of eight points, which means I could add an EndCap and another wireless charger in the future.

The modular setup of the BaseLynx is useful, and the range of available charging options makes it easy to build a charging station that works for the devices that you own. It's also easy to upgrade as you get new devices or as new modular components are added.

I'm a fan of the single power cable because I hate cords, but I wish the design was a little sleeker and slimmer, especially for components like the Apple Watch charger. This charging station is not going to fit on smaller desks and counters because of how much space that it takes up, so it's not really a space saving solution.

With a kit priced starting at $150, it's also quite expensive, but the cost can be amortized by purchasing the charging components piece by piece over time for those who don't want to pay the full price right away. The components (minus the EndCap) all work on a standalone basis.

I hope in the future that Scosche will add alternative components that have additional USB-C ports, as that's the one area where it falls a bit short.

california_kid
What exactly does this product solve that a $10 power strip won't?
Score: 3 Votes (Like | Disagree)

Show me another design like this available on the market currently that can execute charging stations with detachable/customizable plates. Being you won’t find one, I’d say your interpretation of ‘uninspired’ isn't accurate, there really isn’t anything else like this available.

Also, Being you stated this is over priced, have you Researched any other combination of wireless charging that even comes close to this? I think it’s obvious you haven’t researched anything on wireless charging design stations in terms of multiple ‘use cases’ for Charging products simultaneously.
Score: 3 Votes (Like | Disagree)

calzon65
With all the items that need to be recharged these days, just give me a desk with a full recharging surface (as long as it does not give me cancer)
Score: 2 Votes (Like | Disagree)

What exactly does this product solve that a $10 power strip won't?

It looks nicer on your desk.
If this doesn't matter to you, fine. But many people pay $1000 for a single chandelier, or a dresser, when they could get a functional equivalent for $50 or less. That's why a chain like Ethan Allen exists, not just Walmart and Ikea.
Score: 2 Votes (Like | Disagree)

What exactly does this product solve that a $10 power strip won't?

The answer to that is extremely obvious.
Score: 1 Votes (Like | Disagree)

Relentless Power
Macrumors posted something on this about a month back, the ‘modular’ attachments is what I like about it. I personally could see myself charging all my devices at once, and I like the overall layout. [Scosche is a solid company, they’ve been around while.]
Score: 1 Votes (Like | Disagree)
Read All Comments