Many cases for the iPad Pro add a lot of unnecessary bulk, a problem the Oxford Leather Case from Pad & Quill solves through the clever use of adhesive. Featuring a simple book-style design that offers full front and back protection, the Oxford Leather iPad Pro Case uses a strong adhesive to hold the iPad Pro firmly in place while leaving it free to be used with the Smart Keyboard.

Opening a Pad & Quill product is fun because Pad & Quill excels at packaging. The Oxford Case came wrapped in a simple bit of thick brown paper, sealed with red wax and the Pad & Quill insignia. It's tasteful packaging and I always enjoy when manufacturers put a little effort into the unwrapping experience. 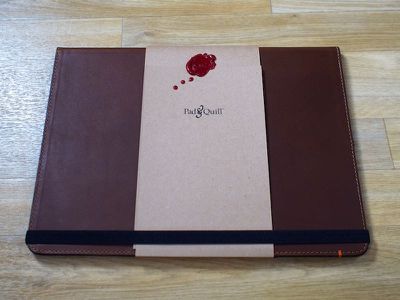 Pad & Quill's Oxford Case, like many of its products, is carefully crafted by hand from high-quality leather. In this case, it's made from a single piece of full-grain bridle leather and comes in two colors: Whiskey and Chestnut. An expensive, high-quality leather pairs nicely with Apple's larger-screened tablet, and the Oxford's design looks like it will work equally well in business and casual situations.

Leather like this will change and age over time, giving each Oxford case a unique, broken-in look to add personality, so that's something to keep in mind when considering this option. Inside the case, there's a softer leather to protect the iPad's screen, and there's also an interior pocket to hold papers and the Apple Pencil.

I wasn't a fan of sticking the Apple Pencil inside the pocket of the Oxford because it adds a noticeable bulge in the case, but I did find it handy for the stray papers I normally keep tucked in my daily planner.

The Oxford is a folio or book-style case, which means it offers full front and back protection for the iPad Pro when it is closed. To keep it closed tight while in a bag or backpack, there's an elastic strap like one might find on a journal.

On the inside of the Oxford case, there are adhesive tabs on one side. The paper covering the tabs will need to be removed and the iPad Pro will need to be stuck to the adhesive, keeping it firmly in place. Due to the adhesive, the Oxford should be treated as something of a permanent case, not one to be removed frequently. If the adhesive does start to become less sticky after the iPad Pro is removed, Pad & Quill does sell extra adhesive.

I held my iPad Pro upside down and shook it vigorously for approximately 10 minutes and the adhesive held strong, but it's still something that has the potential to fail or degrade over time, so that's something that should be kept in mind when using this case. I wouldn't go out of my way to shake my iPad Pro or hold it upside down, even though the adhesive seems to work well.

The cover of the Oxford case is designed in a way that lets it work with Apple's Smart Keyboard, and I found this feature to be quite clever. At the back of the Oxford case, there's an area where adhesive is not used, which lets the iPad Pro be lifted away from the cover. From there, the case can be bent to form a stand for the iPad, which, as it turns out, is also pretty handy for watching videos.

It's easy to get the Smart Keyboard connected to the iPad Pro and in the right position, and as I said before, the cover of the Oxford case itself works great as a stand when watching TV or reading in bed or with the iPad Pro on a lap. The only downside is that using the Oxford case in this way does produce a noticeable line on the back -- this didn't bother me, but it is easy to see and ruins some of the clean aesthetic of the case.

Since it works as a stand, the Oxford case can also be paired with standalone Bluetooth keyboards. Having the option to use the Oxford as a stand or pair it with the Smart Keyboard was a pleasant surprise for me, and a feature that I appreciated as the iPad Pro is more of a permanent case that shouldn't be frequently removed.

Given its thin size, attractive exterior, Smart Keyboard compatibility, and ability to provide total protection for the iPad Pro, the Oxford Leather Case from Pad & Quill will definitely appeal to some users who are looking for those features.

The use of adhesive is going to be a turn off for other people, positioning the Oxford Leather Case as a love it or hate it product. Holding the iPad Pro in place via adhesive is a clever way to keep it secure without adding bulk, but adhesive always has a chance of failing and it's going to prevent the iPad Pro from being removed from the case for the most part.

For someone who wants permanent all-around protection for the iPad Pro, the Oxford Leather Case is a good option. It's undeniably attractive and it's not going to add too much extra weight to the iPad. Being able to use it with the Smart Keyboard and as a stand is an added bonus.

For someone who needs more protection or wants to be able to remove their iPad Pro from its case on a regular basis, the Oxford Leather Case isn't the best choice. It's also worth noting that this isn't a stick it on and forget about it case - you're always going to want to be careful about how you pick it up due to the chance the adhesive could fail, but overall, this is a nice, slim case for the iPad Pro that has a lot going for it.

The Oxford Leather iPad Pro Case from Pad & Quill can be purchased from the Pad & Quill website for $129.95.

mxmgodin
This looks really, really great, but adhesive tape to hold the iPad? No thank you. I prefer a case from which the device can easily be swapped in and out without struggling and/or degrading the case or even the device itself.
Score: 1 Votes (Like | Disagree)

Bubba Satori
Look, a hipster.
I wonder if the beard and hat have adhesive tabs?
Score: 1 Votes (Like | Disagree)

jeahsj
I purchased this case and absolutely love it. The leather is high quality and the construction is excellent. The adhesive tape works perfectly. Not one concern about its strength. I don't like cases where you have to slide in an iPad or click one in and have the case cover portions of the iPad. This case with my iPad Pro is so lean and thin as there is no extra material needed. So thin, it looks like a portfolio rather than an iPad. I have a full view of the iPad, both front and all sides. I am getting many compliments on the case. Glad I found it. And yes....adhesive...seriously! ;-) Works perfectly.
Score: 1 Votes (Like | Disagree)