Review: Nomad's $230 Base Station Pro Features an AirPower-Like Design but With a Few Limitations [Update: Not Recommended] 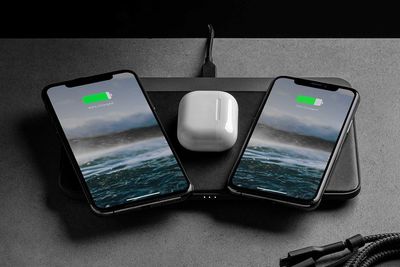 Because of its ability to charge multiple devices with no specific placement required thanks to a new kind of charging design, the Base Station Pro has been likened to Apple's now-canceled AirPower charging accessory.

When it comes to design, the Base Station Pro is a flat, wide charging mat that's sized to accommodate multiple devices such as smartphones and the AirPods. It works with any Qi-based wireless charging accessory, but it is not compatible with the Apple Watch, which does not use Qi charging.

The Base Station Pro measures in at 8.7 inches long, 5.5 inches wide, and 0.5 inches thin, and it features an aluminum base with a leather pad, much like Nomad's other wireless charging options. It looks and feels heavy and high quality, as it should for the $230 asking price. It comes with a braided USB-C cable, a 30W USB-C power adapter, and interchangeable plugs for different countries. Three LED lights at the front let you know when a device is charging.

Aira's FreePower technology used inside the Base Station Pro features a unique 18 coil matrix built into a circuit board along with software algorithms designed to detect a smartphone regardless of its orientation, which allows an iPhone to be placed in any position and orientation on the charging mat. As long as the wireless charging coil inside the ‌iPhone‌ is somewhere on the mat, the ‌iPhone‌ will charge.

The large form factor of the Base Station Pro allows it to accommodate multiple iPhones along with the AirPods or AirPods Pro. I'd say that it comfortably fits two iPhones at the same time while also providing power to AirPods, but it also fits three naked iPhones if you have three to charge.

I've tested a multitude of wireless chargers at this point, and the flat chargers where you need to make sure to match a coil in the charger to the coil in the ‌iPhone‌ can be frustrating to use. If you're off by a bit, your device isn't going to charge, and it can be hard to get the correct position, especially in the dark on a nightstand or when you're in a hurry.

The Base Station Pro addresses that issue. I was able to put my ‌iPhone‌ on the mat at any angle and it successfully detected it and initiated charging. The one exception is right at the edges where there's a bit of a dead zone due to the design of the charger. I had to make sure not to put my AirPods too close to the edge or they wouldn't charge, but that wasn't an issue with the ‌iPhone‌.

I do find it frustrating to have to adjust the positioning of my devices when using standard flat wireless chargers, but I'm not sure it's a big enough problem to justify spending $230 on a wireless charger that has little to offer beyond an elegant design and the nifty any-device-anywhere charging. I think the Base Station Pro is a top tier charger with useful functionality that heralds the future of wireless charging, but do you know what also effectively solves the wireless charging positioning problem? A multi-device charging station with an upright charging space paired with a smaller charging mat like the Logitech POWERED 3-in-1.

The Base Station Pro supports up to 7.5W wireless charging for Apple devices, which is the maximum speed that an ‌iPhone‌ can charge at. In my testing, I was able to charge an ‌iPhone‌ XS Max from one percent to 18 percent in a half hour with one device on the charger.

I was able to charge the ‌iPhone‌ XS Max from one percent to 21 percent with three devices on the charger in a half an hour, so the Base Station Pro is distributing power evenly and multi-device charging doesn't cut down on charging speeds.

After an hour, my ‌iPhone‌ XS Max was charged from 1 percent to 38 percent, and all of these charging speeds are in line with a 7.5W wireless charger. For devices that aren't iPhones, the Base Station Pro charges at a maximum of 5W, and that includes Android devices that support much faster wireless charging speeds. For that reason, it's not the best charger to use with non-Apple smartphones and devices.

In fact, on Nomad's website, it lists the Base Station Pro as compatible with Apple devices and Samsung Galaxy S10 and S20 phones, with support for Google Pixel devices and other Qi-enabled devices "coming soon."

There are some quirks with the charger that don't make for the best charging experience. When I set down an ‌iPhone‌, it takes several seconds for the charging to kick in, whereas with other chargers, it's close to instantaneous. I've also run into a bug where my ‌iPhone‌ continually stops charging for just a second and then reconnects, with the disconnects happening every 20 minutes or so.

The Base Station Pro's firmware can be updated by plugging it into a computer, so some of these issues I've been experiencing may be able to be solved with a future update.

The technology that allows devices to be placed on the Base Station Pro in any spot with no rearranging necessary is useful, but the high price point of the wireless charger is a barrier to entry and I'm not sure the convenience of not having to adjust the location of a device to make sure it's charging is worth such a premium.

Unlike some other charging station options, the Base Station Pro is limited to charging Qi-based devices and has no Apple Watch charging puck, which may be inconvenient for Apple Watch owners. It also would have been nice to see an additional USB-C or USB-A port at the side for charging iPads and other devices at this price point.

You're not going to want to use this charger with non-Apple devices due to the charging speed limitations, and don't count on it when you need power in a hurry because it's slow even with iPhones and AirPods (like all wireless charging).

Aira's charging technology worked well in my testing and offered a glimpse of where wireless charging is heading in the future. I hope to see this functionality roll out to additional products and eventually come down in price, but for now the convenience of drop and go charging is likely too expensive to make it appealing to the average consumer.

There may also be a wireless charger coming from Apple in the not too distant future even after the cancelation of the ‌AirPower‌, if rumors are to be believed. There have been reports of work on a small wireless charging mat, though it's unclear when it might launch. Apple enthusiasts may want to wait for Apple's wireless charger, which could perhaps use similar technology.

The Base Station Pro can be pre-ordered from the Nomad website for $229.95. Shipments will begin in late September.

As of May 2021, Nomad and Aira do not plan further firmware updates for the Base Station Pro, which is something to keep in mind for those who plan on purchasing. The Base Station Pro also has reduced wireless charging efficiency for the iPhone 12 models and slower charging times, so we no longer recommend it.

Note: Nomad provided MacRumors with a Base Station Pro for the purpose of this review. No other compensation was received. MacRumors is an affiliate partner with Nomad. When you click a link and make a purchase, we may receive a small payment, which helps us keep the site running.

MacDevil7334
The prices for these all-in-one Qi chargers are getting ridiculous. $230 for a charger!? I mean, being able to charge multiple devices without thinking about placement is useful. But, not $230 useful.
Score: 21 Votes (Like | Disagree)

TorontoBoy44
As wireless charging becomes the norm for electronic devices, I wish manufacturers could come up with a specification of charging *efficiency* (i.e. 10 watts of charging at the device, costs 20 watts at the plug). And maybe reviewers can make a measurement of efficiency independently.
Score: 6 Votes (Like | Disagree)

Nomad = Exists
AirPower = Does not exist
Score: 6 Votes (Like | Disagree)

TheYayAreaLiving ?
Macrumors: Do a giveaway of this please.
Score: 4 Votes (Like | Disagree)

44267547
I see the benefit for ‘multi-device‘ charging, but this price point is just way too far off base for consumers to find this attractive. I know the Airpower was originally supposed to be between $250-$300, but if you look at Amazons marketplace for wireless charging, there is a variety of chargers that you can use that may not accomplish this many devices at once, but for a much cheaper price point that can be spread around the household for different charging locations.
Score: 4 Votes (Like | Disagree)
Read All Comments

5 hours ago by Juli Clover