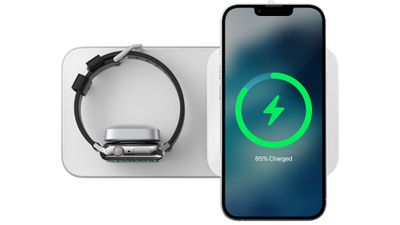 The Base One Max is similar in design to the Base One, featuring a platform with a flat ‌MagSafe‌ charger on the right and a matching upright Apple Watch charging puck next to it on the left. Like the Base One, it comes in silver and white, or carbide, a black color.

I'm not sure why Nomad chose this design, but I think I'd prefer it if had a more uniform look, because as is, it appears to be two mismatched pieces stuck together. It's not a bad aesthetic though, and it still looks quite attractive on a desk. I have the silver version, and it has an Apple-like appeal to it.

The Base One Max is heavy at two pounds and the magnetic attachment is strong, so removing your ‌iPhone‌ from the base still takes a bit of a twist motion and you can't just pull it up directly even with the weight of the stand. The ‌MagSafe‌ charger is the same as Apple's own ‌MagSafe‌ charger and it works identically.

It charges a MagSafe-compatible ‌iPhone‌ at 15W (12W for the iPhone 12 mini and iPhone 13 mini), and I experienced the same general charging speeds that I got with Apple's ‌MagSafe‌ charger in my testing. You can use the Base One Max with non-MagSafe iPhones, but you won't get the benefit of the magnetic attachment and the charging will be limited to 7.5W.

Though the Series 7 Apple Watches support fast charging, the Nomad Base One Max is a standard Apple Watch charging puck that does not support the faster charging speeds.

Nomad includes a USB-C cable with the Base One Max, which does charge over USB-C unlike some other chargers that have a proprietary connector, but the power adapter is not included. You will need to supply your own 30W+ power adapter, which is an extra expense.

At $150 for a dual charging device, the Base One Max is a better deal than the Base One, but it still has a premium price tag that I find to be too high for what it's providing.

It's attractive, high-quality, and looks nice on a desk, but it's missing the third charging spot that some other multi-device chargers at that price point have, and it also does not come with a charging brick, so you need to spend additional money to provide your own.

The Base One Max will appeal to those who don't mind shelling out for the design and the quality, but it may not have the broad appeal of more affordable ‌MagSafe‌ charging solutions.

The Base One Max can be ordered from the Nomad website for $149.95.

roar08
To me, overpriced and ugly. Even if it were less expensive I wouldn't put this on my desk.
Score: 12 Votes (Like | Disagree)

jav6454
At $150, the minimum I'd expect is a power brick that can deliver the speeds advertised, not having to hunt one down myself to bring this total expenditure into the $200 range.
Score: 10 Votes (Like | Disagree)

For $150, you can get Belkin's wireless chargers that will charge your phone, watch AND your airpods.

AND...you get a charger! There are so many things wrong with this product.
Score: 9 Votes (Like | Disagree)

willzyx
For $150, you can get Belkin's wireless chargers that will charge your phone, watch AND your airpods.
Score: 8 Votes (Like | Disagree)

doboy
Meh, waste of money. Better options out there.
Score: 6 Votes (Like | Disagree)
Read All Comments

Saturday February 4, 2023 10:05 am PST by Eric Slivka
Online retailer TigerDirect has slashed pricing on the M1 iPad Air in several colors, offering the base 64GB configuration for just $313.99 in Purple and Pink. Note: MacRumors is an affiliate partner with TigerDirect. When you click a link and make a purchase, we may receive a small payment, which helps us keep the site running. That's a savings of 48% compared to Apple's normal $599.00...
Read Full Article • 595 comments