Three days ahead of its launch, reviews of the iPhone 12 Pro are in. We've rounded up impressions of the device below.

With the iPhone 12 now featuring an OLED display like Pro models, The Verge's Nilay Patel said the differences between the iPhone 12 and the iPhone 12 Pro are "fundamentally much smaller than last year," when the iPhone 11 still had an LCD. In addition to OLED, both devices also feature a faster A14 Bionic chip, 5G support, and a new flat-edge design. 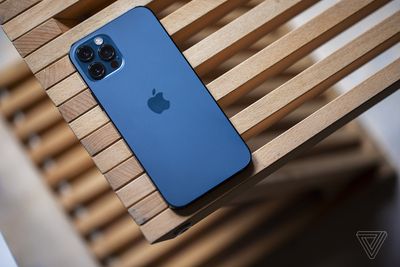 iPhone 12 Pro in Pacific Blue via The Verge
While the iPhone 12 has an aluminum frame, the iPhone 12 Pro features a more polished stainless steel frame, but Patel notes that it is a fingerprint magnet. His team also managed a tiny nick in the frame of the iPhone while reviewing it. In addition to the more durable Ceramic Shield front cover, Apple told The Verge that the new flat-edge design of iPhone 12 models should also improve drop performance.

iPhone 12 Pro models sold in the U.S. support ultra-fast mmWave 5G, and to accomodate this, there is a small window on the side of the device that allows mmWave antenna signals to pass through. Apple told The Verge that holding your hand over this window shouldn't affect wireless performance, and Patel said he didn't have any issues during his brief mmWave testing on Verizon's 5G Ultra Wideband network.

Last year, Patel said the iPhone 11 Pro had the best camera system on a smartphone, and he found that the iPhone 12 Pro takes another step forward with improvements to low-light performance, noise reduction, and contrast.

Watch these iPhone 12 Pro camera tests from photographers Peter McKinnon and Andy To:

Patel also shared a detailed overview of the iPhone 12 lineup's ability to record HDR video in Dolby Vision, a feature he described as a "big deal."

All in all, The Wall Street Journal's Joanna Stern said the iPhone 12 lineup represents "one of the biggest iPhone upgrades in years, no thanks to the 5G connectivity, but because of its fabulous-to-hold design and substantial camera improvements."

It’s really not. Unless your one joy in life is watching your phone scroll through menus slightly smoother. Which, if that’s the case, you need to reevaluate yourself. Media is all 24/30/60 FPS, games might take advantage of it but battery life will really suffer.

Main reason it matters on the iPad is for pencil latency. For example, your pencil will be “faster” than your display on the new air, which results in a delay between writing and seeing the motion, albeit a very small one.

Just another one of those things for people to whine about since they can’t find any other reason to dislike the device.
Score: 29 Votes (Like | Disagree)

No surprise, though. iPhone reviews have been on Tuesday before a Friday launch for nearly a decade.
Score: 27 Votes (Like | Disagree)

Look at an iPad Pro with ProMotion. Use it for 10 minutes. Scroll through some webpages, swipe through apps, etc. Then go into the settings and Limit Frame Rate back down to 60 fps. If you don't notice a difference, then ProMotion isn't for you. If you do, like me, you will begin to appreciate its value. Really smooth content.
Score: 12 Votes (Like | Disagree)

yurc
Prosser said Tuesday first reviewed will roll out, seems he nail it again this time.
Score: 11 Votes (Like | Disagree)

I'm very cynical about this because everything else Apple has done this year indicates to me that 120 Hz displays were scrapped early on as a cost saving measure. In other words, the already ridiculously expensive iPhone Pro models couldn't get 120 Hz displays because Apple wasn't comfortable with the margin.
Score: 11 Votes (Like | Disagree)
Read All Comments