The Chipolo ONE Spot is the first Find My-compatible accessory that's a direct AirTag competitor, offering AirTag-like tracking capabilities for your valuable items. The ONE Spot is slightly more affordable than the AirTag at $28 for one and $90 for four (vs $29 for one AirTag and $99 for four) and it has a couple benefits that make it a worthy AirTag alternative. 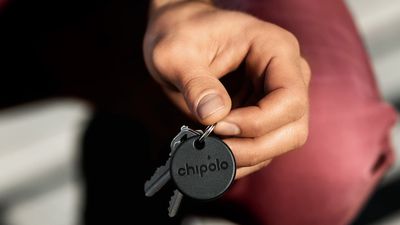 Like the AirTag, the ONE Spot is a small, circular tag that's about 1.5 inches in diameter, so similar in size to a silver dollar. It's bigger than an AirTag, and about as thick, but it's a uniform thickness, whereas the AirTag has a protruding bottom where the battery is housed.

Since it's the same thickness, you can't put the ONE Spot in places an AirTag can't go, such as a wallet, so there's no real difference in design functionality.

Apple's AirTag is heavier than the ONE Spot and holding both, there's no comparison - the AirTag is much nicer. Those concerned with aesthetics will want to opt for the AirTag, but I'm not of the opinion that an item tracking tag needs to stand out.

Given their popularity, AirTags are going to be immediately noticeable when attached to an item, and for some people, that's a plus. ‌AirTags‌ can be engraved and are designed to be seen. Those who want something more unassuming will prefer the Chipolo ONE Spot, which blends in better and is less well known.

Both the ONE Spot and the ‌AirTags‌ share similar base designs, but the ONE Spot boasts a built-in hole that can be attached to a keyring, strap, or another accessory. The AirTag does not have any native way to attach to items and needs a holder of some kind if you want to put it on keys, a pet, the outside of a bag, or similar places.

Chipolo has used the ONE Spot's built-in hole as a feature that sets it apart from the AirTag because there are no additional accessories needed to use it, which is a plus. When you buy an AirTag, if you want to attach it to something, you need to spend at least $5 to find a case, and oftentimes more. Apple's own AirTag cases are priced starting at $29, which is the same price as an AirTag.

To test the AirTag and Chipolo ONE Spot tracking abilities, I tucked both into a suitcase and then checked that suitcase on a recent flight, watching the journey from departure airport to plane to destination airport, and then tracking them at a hotel while I was away.

During this test, I noticed no discernible difference between the two item trackers. Each time I checked, both showed up right in the Items tab in the Find My app at the same time, and locations were updated at about the same intervals based on the iOS devices that were nearby. I did notice that the AirTag seemed to update a bit more frequently, but it was a difference of just a couple of minutes every time that I checked.

The core feature set between the ONE Spot and AirTag is largely the same, but there are a few things worth highlighting that are standout options on each accessory. The AirTag is easier to set up, because you just hold it near an iPhone and it connects right away. With the Chipolo, I held it near my ‌iPhone‌ and was then instructed to press on it (there's a built-in button function). It wasn't difficult, but it was an extra bit of friction.

Chipolo's ONE Spot and ‌AirTags‌ both have an identical Lost Mode that lets you leave a phone number or email address for contact purposes and get a notification if a lost item is found. This feature also lets you play a sound, and it's worth noting that the ONE Spot is easier to hear. I don't think that one is louder than the other in a direct sound comparison, but when tucked away in a bag or couch cushion, the ONE Spot is not as muffled.

Both the AirTag and the ONE Spot use CR2032 batteries that are designed to last for about a year and that are replaceable, so there's little difference there. The AirTag is, however, more water resistant, which makes it better in situations where it might be exposed to liquids or to the elements.

There's one other main difference between the two item trackers, and that's Precision Finding. Apple added a Precision Finding feature that uses the U1 chip in the AirTag when paired with an ‌iPhone‌ 11 or iPhone 12 model, with the option designed to make it easier to track down an item that's lost nearby by pointing you in the right direction.

This is kind of a hit or miss feature that doesn't always work as you might expect it to work, but it's definitely nice to have, especially when an item like a set of keys is lost indoors. There is no equivalent feature on the ONE Spot because it doesn't have an Ultra Wideband chip, but even if it did, Apple doesn't let yet third-party companies access the U1 chip in the ‌iPhone‌ (though this is coming).

When it comes to key functionality, the AirTag and the ONE Spot are basically identical. Both integrate into the ‌Find My‌ app and take advantage of the ‌Find My‌ Accessory Network to make lost items easier to locate.

The ONE Spot wins out when it comes to attachment points and sound thanks to its built-in hole for a keyring or strap and its speaker that isn't as easily muffled.

The AirTag wins out when it comes to aesthetic design, setup, indoor item location, and water resistance, so both have their pros and their cons. You're going to get the same general performance with either of these item tracking tags, and it just comes down to the add-on features that are most important to you.

Note: Chipolo provided MacRumors with a ONE Spot for the purpose of this review. No other compensation was received.

rodien
Pretty sure the AirTag Pro will come with a built-in hole :D
Score: 15 Votes (Like | Disagree)

cupcakes2000
I hope the built in hole is user replaceable.
Score: 12 Votes (Like | Disagree)

MauiPa
"There is no equivalent feature on the ONE Spot because it doesn't have an Ultra Wideband chip, but even if it did, Apple doesn't let yet third-party companies access the U1 chip in the ‌iPhone‌ (though this is coming).

Just for the record, check out this article in that deadbeat rag macrumors: https://www.macrumors.com/2021/04/07/third-party-find-my-devices-u1-chip/. Only kidding but you have to admit it's funny when one macrumors article contradicts another one. So if you please, which article needs to be corrected?
Score: 8 Votes (Like | Disagree)

Jaykay313
I absolutely read this as Chipotle.
Score: 7 Votes (Like | Disagree)

Ion-X
Sorry but the lack of U1 support is a dealbreaker. Yesterday I misplaced my wallet in my room and the sound didn’t indicate where it was located (the sound was muffled due to it being inside something). Only when I went into Precision Finding did I quickly locate it.

I’ll stick with the $25 AirTag + $13 Belkin holder for that feature alone.
Score: 6 Votes (Like | Disagree)
Read All Comments