Review: Anker's Compact PowerPort Atom PD 2 Offers Up to 60W of Power for Charging Your Devices

The PowerPort Atom PD 2 uses Gallium nitride or GaN, a new material that allows semiconductor components to be shrunk down, leading to smaller charging accessories. Anker has been updating its power adapter line with GaN, bringing more compact charging options that take up less space. 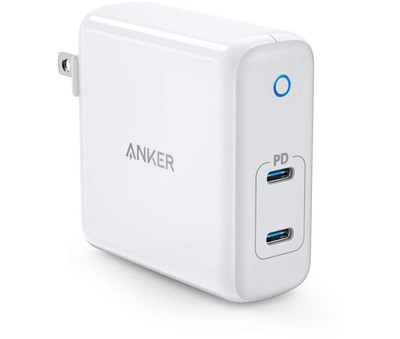 Design wise, the PowerPort Atom PD 2 is smaller than your standard 61W or 87W charger for the MacBook Pro, but it's not as small and compact as the lower power 30W PowerPort Atom PD 1. It measures in at 2.68 inches by 2.72 inches and it's just over an inch thick.

Comparatively, Apple's 61W USB-C Power Adapter is 2.85 by 2.85 inches, and it's about the same thickness, so you're not saving a lot of space with the PowerPort Atom PD 2, but as explained below, it's a lot more versatile.

It's made from a shiny white plastic material with a gray face, an Anker logo at the side, and a charging indicator to let you know when it's in use. At the back, there's a set of retractable prongs that you can fold up when the power adapter isn't in use to make it easier to carrying around.

There are two USB-C ports built into the PowerPort Atom PD 2, which none of Apple's chargers can boast. With two USB-C ports, you're not limited to charging one USB-C device at a time. There are no cables included, so you're going to need to supply your own.

With the Atom PD 2, you can charge a MacBook and an iPad Pro at the same time at full speed using USB-C to USB-C cables, or charge a MacBook or ‌iPad Pro‌ and fast charge an iPhone using a USB-C to Lightning cable. There's a maximum of 60W of power available, so it can charge a 13-inch MacBook Pro at normal charging speed, just like the standard 61W power adapter from Apple.

You could also potentially use this to charge a 15-inch MacBook Pro, though it would charge your machine more slowly than an 87W power adapter. Still, 60W is enough to keep your MacBook Pro going with a moderate work load.

When you're charging a higher watt device like the 13-inch MacBook Pro, you're not going to want to have another device charging at the same time to make sure all 60 watts are going to the MacBook Pro. If you plug in multiple devices, the power is split and managed between devices.

I don't have a 13-inch MacBook Pro, but the PowerPort Atom PD 2 was able to charge my MacBook at the appropriate speed and fast charge my ‌iPhone‌ XS Max at the same time, providing a 50 percent charge from near dead in approximately 30 minutes. It also worked well with my 15-inch MacBook Pro for my standard workload, which involves web usage, Photoshop and other image editing tools, writing apps, and other miscellaneous apps.

Like all Anker devices, the PowerPort Atom PD 2 uses high quality components and features UL certification to ensure its safety.

Anker's charging $54.99 for the PowerPort Atom PD 2, while Apple charges $69 for its 61W USB-C Power Adapter, which makes the PowerPort Atom PD 2 the obvious choice if you need an extra power adapter. Not only is it more affordable, you also get two USB-C ports that can be used for charging a single device at the full 60W or two devices with the 60W of power split between them.

If you have multiple USB-C devices at this point or want to be able to fast charge your ‌iPhone‌ with a USB-C to Lightning cable, Anker's PowerPort Atom PD 2 is a good buy.

Anker's PowerPort Atom PD 2 can be purchased from Amazon for $54.99.

Note: Anker provided MacRumors with a PowerPort Atom PD 2 for the purpose of this review. No other compensation was received.

ESpen36
I believe that Anker has a better reputation than Aukey or Rav in terms of safety.
Score: 2 Votes (Like | Disagree)

Not really an "obvious choice" if the two ports can't simultaneously charge a MacBook and an iOS device. Just plug the iOS device into the MacBook and save $55.

That should probably say the obvious choice if you need an extra power adapter, which I've now added. Probably not worth the extra money if you've already got a 61W charger and don't need extra USB-C ports. Some people like to have multiples for work and office, or for charging in different locations.

You can certainly simultaneously charge a MacBook and an iOS device. The MacBook will charge at the full 30W and the iPhone will fast charge. You're just not going to be able to charge a 13-inch MacBook Pro at its full speed while also charging another device at the same time. If your battery is pretty full, though, and you're not doing something system intensive, you probably don't need the full 60W of power all the time for a MacBook Pro.
Score: 2 Votes (Like | Disagree)

Possible to clarify the statement, "...uses high quality components," please? Was there a tear down?

I mean you could float one iFixIt's way, but Anker's earned their reputation.
Score: 1 Votes (Like | Disagree)

az431
Not really an "obvious choice" if the two ports can't simultaneously charge a MacBook and an iOS device. Just plug the iOS device into the MacBook and save $55.
Score: 1 Votes (Like | Disagree)

Like all Anker devices, the PowerPort Atom PD 2 uses high quality components and features UL certification to ensure its safety.

Possible to clarify the statement, "...uses high quality components," please? Was there a tear down?

The few teardowns of Anker wall adapters I've come across have show that they're good quality, though no one is perfect.

But, before anyone takes that sentence to mean that all Anker adapters are UL-listed, don't.

This particular one may be, but most of them aren't. Some are TÜV certified. Not sure if any of them have ETL certification.

Unfortunately, the marketing of accessories like this can deceptively impliy that the more marks that are plastered on them, the safer they are.

But, each mark has specific, limited meaning. For something like the FCC mark, the only thing that covers is that it won't cause radio interference. It has jack to do with electrical safety. All the RoHS mark means is that it complies with the efforts to cut down on hazardous materials in its construction, like lead-free solder.

Some regional and country-specific marks may also appear, which may be compulsory for legal sale in those areas, but they're not necessarily the same as undergoing an optional certification process from a third-party, independent organization like the UL, especially when self-certification is involved (hello, 737MAX).
Score: 1 Votes (Like | Disagree)
Read All Comments

Tuesday April 13, 2021 9:04 am PDT by Juli Clover
Following an overnight leak by Siri, Apple today officially announced that it will be holding a special "Spring Loaded" event on Tuesday, April 20 at 10:00 a.m. Pacific Time at the Steve Jobs Theater on the Apple Park campus in Cupertino, California. As with all of Apple's 2020 events, the April 2021 event will be a digital-only gathering with no members of the media invited to attend in...
Read Full Article • 275 comments