How to Remove Unwelcome Contacts From Your iOS Share Sheet

Do contacts keep popping up in your iOS Share Sheet that you'd rather not see there each time you open it? Keep reading to learn how to get rid of them. 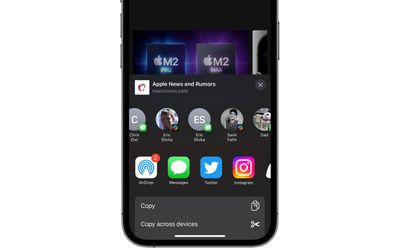 Whenever you go to share something on your iPhone or iPad using the Share button, iOS brings up the activity view – often called the Share Sheet – at the top of which is a row of suggested contacts with whom you've interacted recently. Swiping along this row reveals more contacts, and the icon in the corner of each profile picture indicates the app that you often use to communicate with that person.

These suggested contacts are useful if you share a lot of things with the same people, but there may be times when you'd prefer not to see specific contacts there, for example if someone is a duplicate suggestion over multiple apps, or if you don't want to draw attention to your regular comms with a certain someone. Whatever the reason, you can actually steer these sharing suggestions to appear less often, or not at all. Here's how.

Bear in mind, doing this won't guarantee that the contact doesn't appear in the Share Sheet again in future, but if you keep repeating it whenever they do show up, iOS will eventually get the message.

Short of deleting their contact in the Contacts app, the only way to guarantee that someone doesn't keep turning up on your Share Sheet is to disable the contact suggestions row completely.

That's all there is to it. Now the next time you invoke the Share Sheet, you won't see any contact profiles at the top. You can reverse the change just as easily by switching on the Show When Sharing toggle again.

ahmedg
Oh my God. First time ever a feature that I didn’t know existed. And guess what? I searched for something like this just yesterday.
Score: 8 Votes (Like | Disagree)

xxray
I’m so glad Apple added the option to turn this off. I used to be so scared I’d send someone a link to something I didn’t want to send them… :oops:
Score: 7 Votes (Like | Disagree)

MisterSavage
I was actually shocked at how dumb the selection process was for this. You only sent a DM to a person one time on Slack? Let's suggest them every single time you share something and not use people you contact all the time.
Score: 6 Votes (Like | Disagree)

CarAnalogy
I don’t understand why there isn’t an option to remove a specific contact entirely. Suggest less is kind of patronizing.

“Yeah yeah we know you *think* you don’t want to see this contact, but we know better.”
Score: 4 Votes (Like | Disagree)
Read All Comments

Tuesday August 9, 2022 5:17 am PDT by Tim Hardwick
In a new privacy-centric update released in August 2022, WhatsApp has added the ability for users to adjust the visibility of their "Last Seen" status on a contact-by-contact basis. Keep reading to learn how it's done. As regular WhatsApp users will know, the "Last Seen" status of a contact you're in conversation with sits atop the conversation thread, informing you when that contact last...
Read Full Article

Wednesday September 14, 2022 3:10 pm PDT by Tim Hardwick
In iOS 16, Apple added a new Safety Check feature that's designed to make it easy for users to quickly reset all of the data and location access that they have granted to other people. Keep reading to learn how it works and how to use it. Safety Check is a new option in iOS 16 that lets you stay aware of and reset all of the access to your data and location that you have granted to others....
Read Full Article

Thursday October 14, 2021 11:36 am PDT by Tim Hardwick
Losing your Apple ID password can make your digital life a misery, because it can leave you locked out of the account that you use to manage your Apple devices, unable to access your iCloud data and manage your app and service subscriptions. In this scenario, Apple can't just reset your password for you, especially if your have two-factor authentication enabled. Setting up a recovery is one ...
Read Full Article • 56 comments

iOS 16: How to Control When iPhone Camera Shots Are Saved to Your iCloud Shared Photo Library

Friday September 9, 2022 4:47 pm PDT by Tim Hardwick
In iOS 16, it's possible to create a shared iCloud Photo Library that allows up to five other friends with Apple products to contribute photos to. This means if you are all at the same event, you can have your iPhone camera automatically upload new shots to the same shared library for you to enjoy and look back on together. In the Camera app, you can tap a new icon that looks like two...
Read Full Article

iOS 16: How to Create an iCloud Shared Photo Library

Friday September 9, 2022 4:51 pm PDT by Tim Hardwick
In iOS 16, Apple has introduced an iCloud Shared Photo Library that aims to make it easer to share photos with your friends and family. Keep reading to learn how it works and how you can use it. With the new iCloud Shared Photo Library in iOS 16, a new option in the Photos app lets you create a shared library and then invite anyone with an Apple device to view the photos, contribute photos...
Read Full Article

iOS 16: How to Invite Someone to Your iCloud Shared Photo Library

Friday September 9, 2022 4:48 pm PDT by Tim Hardwick
In iOS 16, it's possible to create a shared iCloud Photo Library and then invite up to five other friends with Apple products to view photos, contribute photos, and edit photos. If you've already created an iCloud Shared Photo Library and still have space for more friends and family to join, you can do so by following the steps below. Just be aware that as the creator of the shared...
Read Full Article

iOS 16: How to Enable or Disable Deletion Notifications for an iCloud Shared Photo Library

Friday September 9, 2022 4:52 pm PDT by Tim Hardwick
In iOS 16, it's possible to create a shared iCloud Photo Library and then invite up to five other friends with Apple products to view photos, contribute photos, and edit photos. If you've already created an iCloud Shared Photo Library that other friends have access to, you can get notified by iOS 16 whenever a photo you contributed to the library is deleted by someone else. Alternatively, ...
Read Full Article

How to Quickly Set a Timer on Your iPhone

Friday September 9, 2022 4:04 pm PDT by Tim Hardwick
Apple's iOS software includes a Clock app that also has a handy timer feature, but you don't even need to open the Clock app to use it. Keep reading to learn how to set a timer on your iPhone in a jiffy. Whether you're busy cooking or just want to limit the amount of time you spend on a certain task, timers come in handy for all sorts of things. And the quicker you can set a timer, the more...
Read Full Article

Thursday September 29, 2022 12:38 pm PDT by Juli Clover
Tony Blevins, Apple's vice president of procurement, is set to depart the company after he made a crude comment about his profession in a recent TikTok video, reports Bloomberg. Blevins was in a video by TikTok creator Daniel Mac, who was doing a series on the jobs of people he spotted with expensive cars. After seeing Blevins in an expensive Mercedes-Benz SLR McLaren, Mac asked Blevins what ...
Read Full Article • 685 comments