Last week, we shared a brief video showing that LG's revisions to the shielding in the UltraFine 5K display have successfully addressed issues with the display flickering and disconnecting when in close proximity to Wi-Fi routers. Apple and LG had temporarily pulled the display from the market while LG adjusted its manufacturing processes to incorporate the fix and push the new stock into sales channels, and sales of the revised display began earlier this month.

At the time of last week's post, we noted that customers purchasing the UltraFine 5K display should check for serial numbers beginning with 702 or 703, as these indicate manufacturing dates of February or March after the fix was put into place. Several MacRumors readers subsequently reported, however, that they have recently received units shipped from Apple with serial numbers starting with 612, indicating manufacturing dates in December 2016.

These readers have been uncertain as to whether their units have the revised shielding in place, or if they should be testing their displays to see if the flickering issue can be induced. One reader noticed that the label on the box of his December UltraFine 5K included a black circular sticker at the top left, a sticker that was not present on our original UltraFine 5K display that was manufactured in November and shipped in December and which was susceptible to the interference issue. 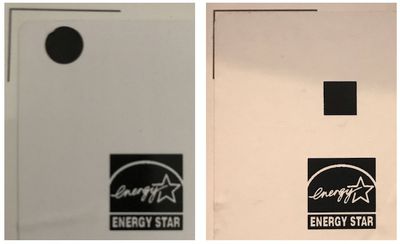 December 2016 unit retrofitted prior to sale (left) vs. March 2017 unit properly shielded from the start (right)
Newly manufactured UltraFine 5K units include a black square printed directly on the label in the same location, and LG has confirmed to MacRumors that the presence of a circle or square does in fact indicate that the unit has the revised internal shielding and should be protected from the interference issues.

While LG did not explicitly confirm any difference between a circle and a square, it appears that the square is indicative of a unit that was originally manufactured with the proper shielding, while the circle is used on earlier units that were subsequently retrofitted with the shielding before sale. There should be no difference in the performance of the two versions.

For those users with units lacking a circle or square on the label and thus susceptible to the Wi-Fi interference, LG is conducting free repairs to install the proper shielding. Users are advised to contact LG to arrange for the repair, which can take up to 7-10 business days once the display is received by the repair facility.

Customers interested in purchasing the UltraFine 5K should remember that Apple's 25 percent discount on USB-C and Thunderbolt 3 accessories is still scheduled to end on March 31, so they have just over a week to order the display at its discounted price of $974 before it goes back up to its regular price of $1299.95. It is possible Apple could extend the discount as it has done once already, but there are no guarantees.

That circle / square sticker thing seems to stack up. As expected, my 701s are both circles. But yeah, I still won't be returning them, as there are no obvious indicators now that these displays are inferior in any way to "square" models. Maybe when I go to sell these on eBay in 5 years, my dreaded "circle sticker" will knock $50 off the price though ;)

Still, it's dubious that LG / Apple are selling these circle models as "new". This is almost the very definition of manufacturer-refurb right? Apart from the fact that they weren't necessarily "returned" by customers (unless you count Apple as LG's customer). They've still been opened, refurbished in-a-sense, and repacked.

I think as long as they are "unused" then it's okay to sell as new, even if they were upgraded and repacked.
Score: 1 Votes (Like | Disagree)

Corrode
Thanks for writing about this. I pick up my fourth display (third replacement) tonight. Hoping for a square!
Score: 1 Votes (Like | Disagree)
Read All Comments