Apple's AirTag item trackers are designed to let users track their everyday possessions, such as keys, wallets, backpacks, and so on. If you find an AirTag that's been separated from its owner, here's how you can safely return it to them. 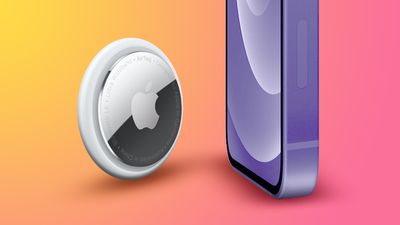 AirTags‌ can be tracked by their owners in Apple's ‌Find My app‌, which uses Bluetooth and other Apple devices to locate them. However, if an AirTag isn't nearby and there are no Apple devices in the area in which it's located, ‌‌‌Find My‌‌‌ can only tell the owner where it was last seen on the map.

In such cases, the AirTag owner can put it in Lost Mode, which allows anyone with an iPhone or Android device that has NFC to help return the AirTag to them. Even if an AirTag isn't in Lost Mode, if it's been separated for a period of time from its owner then it will make a sound to alert anyone nearby.

If you come across an AirTag and you have an NFC-equipped device, here's what you can do to get it back to its rightful owner.

‌AirTags‌ can only be used to track items via an ‌iPhone‌ or iPad with the ‌Find My‌ app. Apple sells individual ‌AirTags‌ for $29 or a pack of four for $99. For more details on AirTag item trackers, check out our dedicated guide.

erinsarah
There are gonna be lots of people finding little beeping discs, having no idea what they are or how to deal with them, and shouting to everyone around them to evacuate the building immediately.
Score: 6 Votes (Like | Disagree)

AirTags can only be used to track items via an iPhone or iPad with the Find My app.

Robospungo
Either ignore it or kick it into the nearest sewer grate? Got it.
Score: 3 Votes (Like | Disagree)

Why not with the Find My on the iCloud website?

That is still called Find iPhone, not Find My, so they clearly have not updated the functionality of the web app, which is a shame.
Score: 3 Votes (Like | Disagree)

nitramluap
I assumed that when you put an AirTag into 'Lost Mode' it would notify any nearby iPhones that it's nearby & lost, but this isn't the case.

They have to actually *see* the AirTag and then use their NFC reader to get the details. The only thing 'Lost Mode' appears to do is allow you to display a phone number (the message thing doesn't work for me) for the person who does scan it.

So it makes no sense whatsoever to hide an AirTag if you expect someone to help get it back to you. They need to be able to see it so they can scan it.
Score: 2 Votes (Like | Disagree)

PsykX
Should I put an AirTag on an AirTag I really don't want to lose ?
Score: 1 Votes (Like | Disagree)
Read All Comments