Is Your macOS Catalina Install Stuck? Here's How to Fix It

Apple on Monday released macOS Catalina to the public, allowing everyone to install the newest version of the operating system for the Mac.

Based on reports on the MacRumors forums, Twitter, and other social networks, some people are running into a specific problem - an installation that hangs. 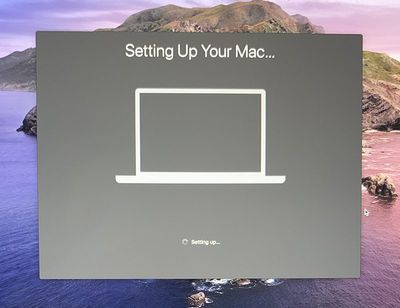 Image via MacRumors reader xodbox
After downloading macOS Catalina and installing from the Mac App Store, some people have seen the installation process stop right at the "Setting Up Your Mac..." screen, and even after waiting for hours, it doesn't resolve.

Luckily, there appears to be a super simple fix for this issue: Just restart. Hold down the power button on your Mac until it turns off, and then power it back on.

Based on reports from MacRumors readers, this fix will send you to the login screen or to your desktop.

After the Mac gets to the "Setting Up Your Mac..." screen, the macOS Catalina installation is largely complete. We don't recommend restarting right away, but if sits at that screen for a half hour or more, shut it down because it's not going to resolve on its own.

The macOS Catalina installation takes some time so don't restart ahead of when the setup screen pops up, but based on a multitude of reports, resetting in this way if it gets stuck appears to be a safe way of getting your Mac up and running again.

machpost
Nope. This is all I needed to see to decide that it's going to be a long time before I upgrade to Catalina.
Score: 15 Votes (Like | Disagree)

Really? Thats a shame because its a rather minor issue, and the OS itself is really cool.

If the install process is that buggy it doesn’t exactly inspire confidence does it?
Score: 11 Votes (Like | Disagree)

Morgenland
Adobe took its latest stand-alone version Photoshop CS6 off the market in January. The 64-bit application worked under Mojave in 64-bit limited mode, I had tested it too.
But it doesn't work under Catalina anymore.

Since I don't think Adobe's current software rental is cool, I've basically separated from the company. I'm glad that there are professional others with same or better features, e.g. Affinity.

Vags8
The fact that all the 32bit apps are not supported is a big NO for me to update.
Score: 3 Votes (Like | Disagree)

sugargliderdude
Going to wait until next year to install Catalina....
Score: 3 Votes (Like | Disagree)
Read All Comments