Apple's $149 Powerbeats Earbuds: Everything You Need to Know

Subscribe to the MacRumors YouTube channel for more videos.
The new Powerbeats, which are technically the Powerbeats 4 but don't have the number at the end, are pretty much identical to the Powerbeats Pro in functionality but without the wire-free design.

Our Powerbeats guide has all of the details that you need to know about Apple's newest earbuds, which are ideal for use when working out.

The Powerbeats are similar in design to the ‌Powerbeats Pro‌, but with a cord that connects the two earbuds to one another. 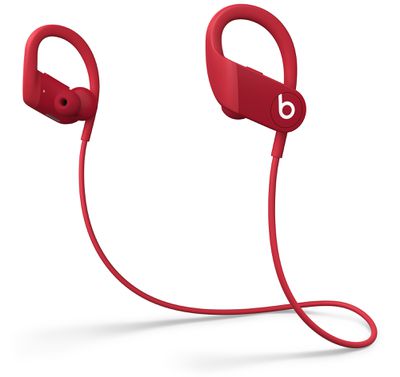 In prior versions of the Powerbeats, the cord trailed down from the side opposite the earhook, but in the new model, the cord attaches to the bottom of the earhook, which Apple says makes for a natural, ergonomic contour around the neck.

Like the ‌Powerbeats Pro‌, the Powerbeats feature earhooks that fit over the ears to keep them in place during vigorous exercise. Apple provides ear tips in four sizes with the Powerbeats so each person can get the best possible fit.

While Powerbeats have silicon tips to create a tight fit in the ear that isolates sound, there is no noise cancellation technology.

Apple offers the Powerbeats in Black, Red, and White.

There are physical playback controls on the Powerbeats that can be used for adjusting the volume, skipping songs, declining or accepting incoming calls, activating Siri, and playing and pausing music.

Volume is controlled by the rocker at the top of the Powerbeats, while other functions use the round button on the side that also features the "B" logo for Beats.

Apple says that the Powerbeats deliver the same rich audio as the ‌Powerbeats Pro‌ with pistonic drivers that offer clean sound reproduction with low distortion across the frequency curve and enhanced clarity and "great dynamic range."

There are two beam-forming microphones on each side that filter out external sound so incoming calls sound crisp and clear.

Powerbeats are equipped with the same H1 chip that's been included in all recent Apple earbud products, including the ‌Powerbeats Pro‌, AirPods 2, and AirPods Pro.

The H1 chip allows for fast connections to Apple devices and quick switching between Apple devices that are using the same Apple ID.

Powerbeats have an IPX4 water resistance rating, which means they're certified to hold up to water splashing against the enclosure from any direction, but have the potential to fail when immersed or exposed to jets of water.

With an IPX4 rating, the Powerbeats should be able to survive sweat exposure, though heavy rain, immersion, and other liquid exposure should be avoided.

In addition to an H1 chip for "Hey ‌Siri‌" support, fast device switching, and quick connections to devices, the Powerbeats support Class 1 Bluetooth technology for extended range and uninterrupted listening.

Powerbeats have a 15-hour battery life on a single charge (which is three hours longer than Powerbeats 3) and there's a 5-minute Fast Fuel feature that provides an hour of listening time after a five-minute charge.

Powerbeats do not have a charging case and are charged using a Lightning cable through a Lightning port on the bottom of one of the earbuds.

Powerbeats can be purchased from the online Apple Store as of March 18.

Have questions about the Powerbeats or know of details we've left out? Let us know in the comments or Send us an email here.

DVNIEL
The big question is which charging port will the PB4’s use....
Score: 3 Votes (Like | Disagree)

Still no Studio4 headphones?! I wouldn’t touch Beats but she likes them and we’ve waiting some time and still no sign of them...
They updated the Solo’s which no one wants.

I personally think beats is garbage in terms of headphone audio, I really don’t have any complaints about their ‘car audio‘ in my 18 Scat Pack. But altogether, Beats has their branding, But I’d like to see Apple have their own Proprietary studio ‘over the ear’ headphones.
Score: 1 Votes (Like | Disagree)
Read All Comments