8 Multi-Device Wireless Chargers Worth Checking Out

There are tons of wireless chargers for Apple devices on the market, and with Apple's decision to cancel the AirPower, multi-device charging options have become more popular than ever.

Many of the multi-device chargers in our guide below can charge an iPhone or two, the AirPods or AirPods Pro, and the Apple Watch, and they're great options if you want to have a one-stop spot for charging more than one device at a time without a mess of cables.

A favorite of several of us here at MacRumors, the POWERED 3-in-1 Dock from Logitech is a simple, no-frills charger that works well and has an ideal layout for charging the ‌iPhone‌, AirPods/‌AirPods Pro‌, and Apple Watch. 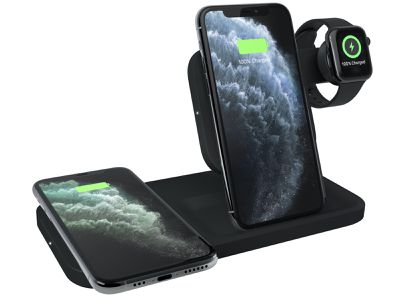 There's an upright charging platform for an ‌iPhone‌, which gives you a clear cut space to put your ‌iPhone‌ so there are no placement mistakes, and an arm houses the Apple Watch charging puck. A second platform provides charging space for either another ‌iPhone‌ or the AirPods.

The Apple Watch Base Station from Nomad is a well-made multi-device charger that can charge an ‌iPhone‌, Apple Watch, and AirPods all at once using the flat leather-covered charging platform and the upright Apple Watch charging puck.

It's compact, fits well on a desk or table top, and has a USB-A and USB-C port at the back for charging additional devices.

Nomad Apple Watch Base Station for $149

The Spansive Source is a unique multi-device charger that has a tent shape with two sides that can both charge two smartphones at once, making it ideal for families with multiple smartphones that use Qi-based charging.

Exact placement on the dock isn't required because it has multiple wireless charging coils, but the upright chargers are limited to smartphones and won't work with AirPods. If you need to charge AirPods or the Apple Watch, there are two additional USB-A ports. The Spansive Source charges iPhones at a maximum of 5W, so it's slower than 7.5W chargers.

The Pitaka Air Omni is designed to be a charging station for all of your devices. It can charge the AirPods, Apple Watch, and ‌iPhone‌ wirelessly, plus it has spots for charging iPads and other devices through the added USB-A and USB-C ports (there's one of each).

Pitaka calls this a 6-in-1 charger, and there's a little adapter for swapping between Lightning and USB-C for charging through the tablet docking area. With the extra space for charging an iPad and a little pull out drawer that's included, it's rather big and bulky, which is something to be aware of. It can be purchased through Kickstarter for ~$140 and is supposed to be delivered starting in June 2020.

The Eggtronic Power Bar is a multi-device charger that's also a power bank, so you can take it with you on the go. It has a 10,000mAh capacity, which is enough to charge up an ‌iPhone‌, AirPods, and Apple Watch once or twice.

It can charge all three devices at the same time, and there's also a 30W USB-C power delivery port for charging an ‌iPad‌ or a MacBook, but 10,000mAh isn't really enough for charging up those higher-capacity devices.

Belkin's Boost Up Wireless Charging Dock can wirelessly charge an ‌iPhone‌ and an Apple Watch. There's an upright charging platform for an ‌iPhone‌, which is ideal because you can just set the ‌iPhone‌ down and start charging right away, plus a charging puck for the Apple Watch.

This option is somewhat expensive and it doesn't charge the AirPods, but there is a USB-A port at the back for charging an additional device like an ‌iPad‌ or AirPods with a USB-A to Lightning cable.

Belkin Boost Up Wireless Charger for $120

Zens makes a range of wireless charging options, and the Liberty is one of the newest ones. It can charge two Qi-based devices at one time, such as an ‌iPhone‌ and AirPods, plus there's a charging puck for charging an Apple Watch.

The Apple Watch charging puck can be removed if desired, leaving enough space to charge two smartphones, and it can be plugged in to any USB-A port. There are 16 coils in the Liberty, so an ‌iPhone‌ (and/or AirPods) can be put anywhere on the flat surface.

Native Union's Drop XL Apple Watch Edition can charge an ‌iPhone‌, AirPods, and Apple Watch all at once. It's compact and has an attractive fabric design that also provides grip.

The Apple Watch charging puck can be removed, leaving enough space to charge two iPhones side by side, and it has a durable braided cable.