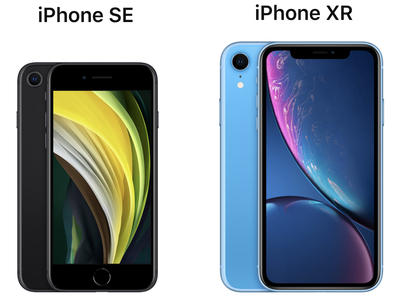 With the iPhone 8 and iPhone 8 Plus now discontinued, the lower end of Apple's smartphone lineup now includes the new iPhone SE and the iPhone 11, but it is still possible to get the older iPhone XR from some third party retailers, released in October 2018. Thinking about upgrading? Read our comparison of the devices below.

Both displays are LCDs with 326 pixels per inch, True Tone, 625 nits max brightness, a 1400:1 contrast ratio, and support for the P3 wide color gamut.

The iPhone SE is powered by the A13 Bionic, which is the same chip inside the iPhone 11 and iPhone 11 Pro. By comparison, the iPhone XR is equipped with the previous-generation A12 Bionic chip.

Apple advertises the A13 chip as up to 20 percent faster and up to 30 percent more power efficient than the A12 chip.

Face ID debuted on the ‌iPhone‌ X in 2017. At the time, Apple said the probability that a random person could unlock someone else's ‌iPhone‌ X was approximately one in 1,000,000, versus one in 50,000 for ‌Touch ID‌. However, both forms of authentication are quite safe, so it really comes down to personal preference.

Since the new iPhone SE lacks Face ID, it does not support Animoji or Memoji.

As a physically larger device, the iPhone XR has longer battery life than the new iPhone SE.

The new iPhone SE is 7.3mm thick and weighs 0.3 pounds, while the iPhone XR is slightly thicker and heavier at 8.3mm and 0.4 pounds.

Both the new iPhone SE and iPhone XR come in Black, White, and (RED), and the iPhone XR is also available in Blue, Coral, and Yellow.

If price is the key factor in your upgrade decision, then the third-generation iPhone SE is a very compelling device considering that it has the same A13 Bionic chip as the iPhone 11 Pro.

If you are upgrading from an older device like an iPhone 6 or iPhone 7, you will already be familiar with the home button experience on the new iPhone SE, whereas Face ID and gestures on the iPhone X and newer take some time to get used to. And with a 4.7-inch display, the new iPhone SE is also the same size as the iPhone 6, iPhone 7, and iPhone 8.

The new iPhone SE might also receive at least one additional year of iOS updates compared to the iPhone XR given its newer A13 Bionic chip.

This article would have been more apropos if you had waited until the new SE was released, and did actual hands on comparison between the two phones. As such, making any recommendation involving a phone that hasn’t been released is illogical.

It would be even more logical to wait 5 years so that they know which one is more reliable in the long run.
Score: 18 Votes (Like | Disagree)

JosephAW
I'm wondering when the tear down is revealed will we find it is using the same LCD display panel as the iPhone 8 that includes the hardware built into the screen for 3D Touch and that is disabled in software for the SE.
Score: 15 Votes (Like | Disagree)

Obviously a false comparison. This is designed for people who had an iPhone 8, 7, 6s, etc. People who already bought an XR would be looking for an iPhone 11.

Folks with a iPhone 8, 7, 6s may be looking to upgrade and might end up going with the XR even though it’s been out for a while. This is a great post for those wanting to know.
Score: 13 Votes (Like | Disagree)

MattMJB0188
Original iPhone user here who has the 8 plus and refuses to upgrade to the iPhone X/11 design. This will be my next phone. I just wish it had 3D Touch
Score: 13 Votes (Like | Disagree)

Westside guy
The $399 pricepoint is certainly a relevant feature of the SE.
Score: 13 Votes (Like | Disagree)

Since the new iPhone SE lacks Face ID, it does not support Animoji or Memoji.

Oh - there’s yet another advantage of the SE. :p
Score: 13 Votes (Like | Disagree)
Read All Comments

iOS 16: How to Remove the Home Screen Search Button