What's New With HomeKit in iOS 15

iOS 15 didn't focus heavily on improvements to HomeKit and the Home app, but there are some notable features like expanded HomeKit Secure Video support and new Siri functionality. 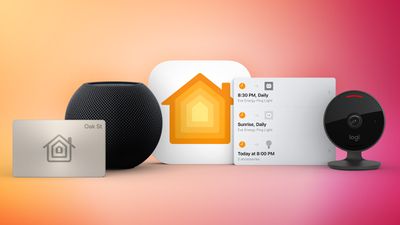 This guide highlights all of the features that are new to ‌HomeKit‌ in the iOS 15 and iPadOS 15 updates.

All ‌HomeKit Secure Video‌ footage that's stored in ‌iCloud‌ is secure and end-to-end encrypted, and no camera footage counts against the total ‌iCloud‌ storage that you have available. To use ‌HomeKit Secure Video‌, you need the 50GB plan at a minimum, along with a HomePod, HomePod mini, Apple TV, or iPad that serves as a home hub for your ‌HomeKit‌ devices.

The digital key can be used to tap to unlock a compatible lock, so you don't need a manufacturer's app to use digital unlocking features.

Home Keys can be accessed on the iPhone or on the Apple Watch using the Wallet app.

Third-party ‌HomeKit‌ accessory makers can integrate ‌Siri‌ functionality into their devices in iOS 15, but the person using the device needs to own a ‌HomePod‌ that can be used to route requests. This functionality needs to be implemented by manufacturers and so it won't be available right when iOS 15 launches.

With ‌Siri‌ integration, you can ask any compatible product in your home to send messages, set reminders, contact family members, control devices, and more.

Have questions about the new ‌HomeKit‌ changes in iOS 15, know of a feature we left out, or want to offer feedback on this guide? Send us an email here.

I have one word for you, “Updating…”

In all honesty, I gave up on HomeKit enabled devices. In all honesty, it would have been dope if Apple would have bought Arlo and then have a sure shot HomeKit native system (granted they would still be pricey, since Arlo's cameras + month packages (especially with 24/7 recording) is $$$). Then again, HomeKit is still quirky AF. I'll probably get ratio'd to heck, but that's just my opinion.

I'm a huge believer (and inve$tor, ha) in HomeKit accessories in every room but even I'd say "quirky AF" is pretty apt. It's the comments, not yours, that claim "it's trash" or simply "doesn't work" or something else dramatic. Legit, solid HK accessories – no, not Hoobs/Homebridge hacks – work solid depending on your home network. But very diverse wireless networks and issues at home, from boxes to mesh to ISPs to microwaves, really seem to create most 'IOT' issues, HomeKit or otherwise. This article highlights how much more Apple could do, personally. I'd have to hope further development on API or UX with Home app/HK was paused a bit this year while the 'more important' Matter alliance stuff is being worked out.
Score: 12 Votes (Like | Disagree)

nitramluap
"This feature uses the Automation option in the Home app, so every time you ask ‌Siri‌ control a ‌HomeKit‌ device at a specific time, it creates an automation."

Yes, this makes me not want to use it. It creates unnecessary clutter. It's like the alarm issue when created with Siri - you end up with dozens of alarms which you need to manually delete.

It needs to be smarter. Siri should ask "Do you want to repeat this every day?". If it's a single request it shouldn't store it as an automation, or if it does, delete it immediately after running.

In all honesty, I gave up on HomeKit enabled devices. In all honesty, it would have been dope if Apple would have bought Arlo and then have a sure shot HomeKit native system (granted they would still be pricey, since Arlo's cameras + month packages (especially with 24/7 recording) is $$$). Then again, HomeKit is still quirky AF. I'll probably get ratio'd to heck, but that's just my opinion.

aesc80
In all honesty, I gave up on HomeKit enabled devices. In all honesty, it would have been dope if Apple would have bought Arlo and then have a sure shot HomeKit native system (granted they would still be pricey, since Arlo's cameras + month packages (especially with 24/7 recording) is $$$). Then again, HomeKit is still quirky AF. I'll probably get ratio'd to heck, but that's just my opinion.
Score: 8 Votes (Like | Disagree)

Do you have issues with people assuming you are not being honest? But, I agree. Homekit is a strange hodgepodge ATM.

It's Macrumors - if you're not in love with Apple, then you're trash (unless it's something seriously bad, like CSAM). It's important to remember that while Apple tends to make features to be absolutely great (can't tell you how much I use AirDrop in my job, and I love it!), they'll swing and a miss on certain other ones. HomeKit is definitely in that list.

Homepods were grossly overpriced, Siri just wasn't exactly built like Google / Alexa to drive that kind of at-home interaction, and HomeKit overall is arranged in a way that feels like it belongs on Ubuntu rather than an smooth iOS device. It's a pain because, for my personal life, I'm so invested in the Apple ecosystem. It's just a shame that Apple invested so much into things like Smart Car that may never see the day (unless it gets released as an OS system for some other auto manufacturer), and nothing like IoT and Smart Home, where iOS and tvOS would totally shine.
Score: 7 Votes (Like | Disagree)
Read All Comments