Apple launched the fifth-generation Apple TV 4K in September 2017 with two models for customers to choose from: 32GB ($179.00) and 64GB ($199.00). With its tvOS App Store, ‌Apple TV‌ 4K allows you to download video apps including Hulu, Amazon Prime Video, and HBO GO, which funnel into the centralized TV app to organize every show and movie that you watch. 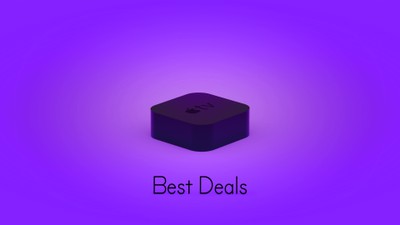 These models of the ‌Apple TV‌ 4K have been discounted by as much as $50 in past sales at major Apple resellers like Adorama, Amazon, B&H Photo, Best Buy, and MacMall (which is now integrated with TigerDirect). In this guide we'll be tracking the lowest prices for both 32GB and 64GB ‌Apple TV‌ 4K models - as well as the non-4K ‌Apple TV‌ HD - from these retailers and others.

The 2015 ‌Apple TV‌ HD is a bit cheaper than the 4K model, and available for $144.00, down from $149.00 at TigerDirect. The ‌Apple TV‌ HD has all of the features of the ‌Apple TV‌ 4K, including the Siri Remote, without the 4K UHD output.

We follow deals on ‌Apple TV‌ 4K and much more over in our full Deals Roundup, so head there for even more information on the latest bargains related to Apple products and accessories.