In November 2020, Apple updated the Mac mini with the first Apple Silicon chip for the Mac, the M1 chip. However, Apple continues to sell its older, Intel-based Mac mini. The Intel ‌Mac mini‌ last received a significant update in 2018, so why is Apple still selling its older ‌Mac mini‌? 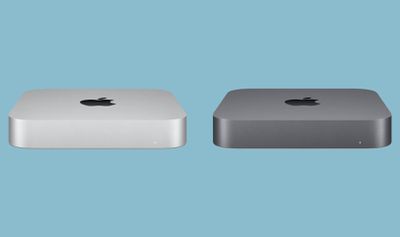 Curiously, rather than making the older model available for a lower price, Apple is presenting the Intel-based ‌Mac mini‌ as a high-end option, starting at $1099, which is substantially more than the $699 starting price of the Apple Silicon-based ‌Mac mini‌. Our guide helps to answer the question of how to decide which of these two Mac minis is best for you.

Comparing the M1 Mac mini and the Intel Mac mini

The M1 ‌Mac mini‌ and the Intel ‌Mac mini‌ share a large number of important features such as design, storage capability, and USB-A ports. Apple lists these same features of the two devices:

Although the two Mac minis share a number of features, the two machines have more in contrast than they do in common, including memory capacity, ports, and external display capability.

Read on for a closer look at each of these aspects, and see exactly where Apple's Mac minis differ.

The key difference between the two Mac minis is their processors. The main ‌Mac mini‌ Apple now sells contains the M1 chip, which is Apple's first custom silicon SoC for the Mac. The ‌M1‌ has an eight-core CPU with four performance cores and four efficiency cores, and an eight-core GPU.

Early benchmarks suggest that the ‌M1‌ in the ‌Apple Silicon‌ ‌Mac mini‌ achieves a much higher single-core score of 1,682 and a multi-core score of 7,097.

Although it is still early days for the ‌M1‌ and it is difficult to speculate on exactly how well it will perform in certain circumstances, these early benchmarks are extremely impressive.

Since the ‌M1‌ is clearly more powerful than either of the Intel offerings in the ‌Mac mini‌, who should consider the Intel processors? If you need to run Windows via Boot Camp, virtual machine apps that virtualize x86_64 platforms, apps which you are concerned may not run well under Rosetta 2's translation layer, or use eGPUs, the Intel ‌Mac mini‌ offers a more reliable option. If your workflow is dependent on older technologies, it may be better to buy the Intel ‌Mac mini‌ until ‌Apple Silicon‌ becomes more mature.

For the vast majority of users, the ‌M1‌ offers a major performance increase, but a small segment of "pro" users may be better suited to an Intel-based machine.

The ‌M1‌ ‌Mac mini‌ only supports configurations of 8GB or 16GB of unified memory, but the Intel ‌Mac mini‌ can support up to 64GB of memory. While 8GB or 16GB should be sufficient for most users given the efficiency of having everything integrated on one chip, some pro workflows demand much larger amounts of memory. In these cases, the Intel ‌Mac mini‌, which offers significantly higher 32GB and 64GB RAM configurations, will be a much more viable option.

Unlike memory, where the Intel ‌Mac mini‌ is clearly more capable, the picture is a bit mixed when it comes to connectivity and ports.

The 13-inch MacBook Air and MacBook Pro are the only other Macs available that contain ‌Apple Silicon‌ chips so far, but they are laptop machines, unlike the ‌Mac mini‌.

Apple's other desktop computers, the iMac and Mac Pro, have not yet transitioned to ‌Apple Silicon‌, so the ‌M1‌ ‌Mac mini‌ is the only ‌Apple Silicon‌ desktop currently available.

The ‌M1‌ ‌Mac mini‌ therefore holds a fairly unique place in the current Mac lineup, which makes it difficult to highlight specific alternatives to it. The Apple desktop closest to the ‌Mac mini‌ would likely be the 21.5-inch iMac since it is one of Apple's more affordable desktop computers. However, the 21.5-inch ‌iMac‌ is an all-in-one with a display included, it has not been updated since 2019, and it is considerably less powerful than the ‌M1‌ ‌Mac mini‌.

Overall, it is clear that the two ‌Mac mini‌ models are significantly different from one another. You should only consider the older Intel-based ‌Mac mini‌ if you are dependent on an Intel architecture for tasks that do not work with ‌Apple Silicon‌. Similarly, if you require a large amount of RAM or want to have many USB devices attached directly to your machine, the Intel model is the only feasible option.

Same 10-year old design and footprint as the Core 2 Duo version from 2010.

So what? Why does a desktop computer's external design or footprint need to be anything more than practical?
Score: 21 Votes (Like | Disagree)

Mcsnee
I've never really considered a Mac Mini until now, but the M1 version seems like a great machine.
Score: 14 Votes (Like | Disagree)

Weird that the M1 outperforms the Intel on benchmark tests but the Intel is marketed as a higher-end machine...

No this is brilliant from Apple....... if they market this as the high end then it would get absolutely slated in reviews, but because they say that this is our first chip for the lower end, and it is actually smashing the high end intel says “look at what we have started with, and look forward to what we are capable of in the future”.......
Score: 12 Votes (Like | Disagree)

mortenb
Main drawback for the new Mac mini is the fact it has only 2 TB ports. If you have multiple monitors and external SSD's 2 ports is just not enough. Of course you can use HDMI for one monitor but then there's no USB pass-through to the monitor.

Perhaps - I hope - this first Mac mini is just a low-end start model and a better spec version will be available later.
Score: 11 Votes (Like | Disagree)
Read All Comments

Thursday April 29, 2021 1:58 am PDT by Hartley Charlton
AirTag is Apple's newest product line, a small round disc used to track items using the Find My app. Yet Apple is not the first to offer item trackers of this kind. Tile has been making Bluetooth item trackers for almost a decade and is now AirTag's main competitor. As the two leading item trackers share a number of key features, it may not be immediately obvious which is better for your...
Read Full Article • 89 comments

Apple M1 Chip: Everything You Need to Know

Friday November 27, 2020 12:13 pm PST by Juli Clover
Apple in November 2020 released the first Macs with an Arm-based M1 chip, debuting new 2020 13-inch MacBook Pro, MacBook Air, and Mac mini models. In 2021, Apple added the M1 iMac and the M1 iPad Pro. The M1 chip has received rave reviews for its incredible performance and efficiency, and it is the culmination of more than a decade of Apple's work on chips created for the iPhone and the iPad. ...
Read Full Article • 131 comments

Friday April 30, 2021 12:06 pm PDT by Juli Clover
Apple is developing a next-generation version of the M1 Apple silicon chip, which will tentatively be called the "M2." The M2 is believed to be shipping in 2022, and current rumors suggest that it could be a replacement for the M1. What We Know There are actually several successors to the M1 chip in the works at Apple's labs in Cupertino, and the M2 may not be the next Apple silicon chip...
Read Full Article