Apple's new M1-equipped MacBook Air, MacBook Pro, and Mac mini do not appear to be compatible with eGPUs, including the Blackmagic eGPU that Apple has promoted alongside other Macs and that is available through the online store. 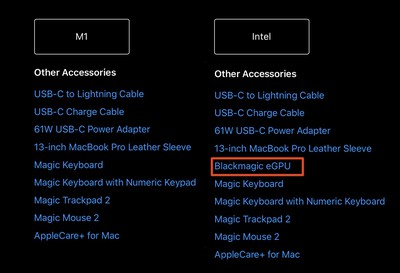 I assumed the ‌M1‌ Macs would support eGPUs since they have Thunderbolt ports but I was wrong. Maybe a software update can bring back eGPU support to Apple Silicon Macs? https://t.co/M0ixmEkeKz — Steve Moser (@SteveMoser) November 10, 2020

The same is true for the ‌Mac mini‌, which also comes in both ‌M1‌ and Intel varieties. ‌MacBook Air‌ models have all been replaced with ‌M1‌ chips, and none of those machines support eGPUs.

With no eGPU options available at the current time, the new Macs will have to reply on their own ‌M1‌ chips with built-in GPUs. All ‌M1‌ chips feature an 8-core GPU with the exception of the ‌M1‌ chip used in the entry-level ‌MacBook Air‌, which has a 7-core GPU.

Update: Apple has confirmed to TechCrunch that the ‌M1‌ Macs do not support eGPUs.

immortalwind
No Windows Bootcamp support, no egpu support... This gets less and less appealing to gamers.
Score: 48 Votes (Like | Disagree)

I guess if you need an eGPU you wouldn’t start out with a MacBook Air, low end pro or the mini anyway. Assume the more high end arm models will support it

Actually eGPUs were relatively popular on the Mac Mini given it was quite a powerful little machine with the option of 64GB RAM and 10Gb Ethernet.
Score: 28 Votes (Like | Disagree)

No Windows Bootcamp support, no egpu support... This gets less and less appealing to gamers.

And less appealing to professionals.
Score: 23 Votes (Like | Disagree)

farewelwilliams
would be surprising if they did support it
Score: 23 Votes (Like | Disagree)

I guess if you need an eGPU you wouldn’t start out with a MacBook Air, low end pro or the mini anyway. Assume the more high end arm models will support it

The mini was one of the first touted platforms for the eGPU.
Score: 21 Votes (Like | Disagree)

The information in this article is false. Macs with Apple Silicon, including the three announced today, support eGPUs.

We're going to need a source for this claim
Score: 13 Votes (Like | Disagree)
Read All Comments

Monday May 10, 2021 8:51 am PDT by Hartley Charlton
Independent technicians have reportedly been able to use leaked MacBook schematics to aid repairs (via Vice). Last month, Apple supplier Quanta Computer was hit with an attack by the ransomware group known as "REvil," leading to a large quantity of internal Apple documents about both released and unreleased devices being exposed. The leaked PDFs, available on a number of forums and online...
Read Full Article • 95 comments