Apple's AirTags do not come with a hole or any kind of attachment method, and short of drilling your own, you're going to need some kind of keyring, adhesive mount, or holder to attach the AirTag to various items. 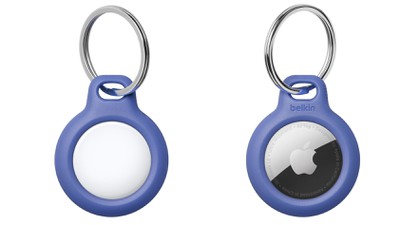 In this guide, we've rounded up a list of useful third-party ‌AirTags‌ accessories that you might want to check out.

Apple makes its own series of AirTag cases, which are available in either silicone or leather and are priced at $29 to $39, plus there are several high-end Hermès AirTag holders priced starting at $299.

Available as a Key Ring or a Strap, the $12.95 Belkin Secure Holder is designed to keep an AirTag in place and attached to an item of your choice. It features a twist-and-lock closure with raised edges to keep the AirTag from getting scratched, and it comes in white, pink, black, and blue.

Belkin's Secure Holders can be purchased from Belkin directly or from Apple.

Moment has a range of AirTag Mounts available that house an AirTag and are able to stick on various items. Moment says that you can stick an AirTag mount in bags, on clothes, or on the bottom of different devices, and with the adhesive stick method, ‌AirTags‌ can be hidden from thieves.

Nomad debuted its Leather Keychain well ahead of the launch of the ‌AirTags‌, but it's now officially available for pre-order. Priced at $30, it comes in either black or brown and houses a single AirTag. It can be attached to bags or other items, plus Nomad is also offering a $30 Glasses Strap with built-in AirTag holder for keeping track of your sunglasses.

dbrand has a series of Grip Cases available for ‌AirTags‌ in a variety of colors. Each grip fits over the AirTag and adds a skin and an attachment point to place it on bags and other items. The Grip Cases are priced at $19.95 each.

The ElevationLab TagVault is a heavy duty ‌AirTags‌ case that offers total protection and waterproofing for an AirTag. It comes apart in two pieces, allowing an AirTag to be fit in the middle before screwing back together. The TagVault features a minimal design and is designed for situations where the AirTag might experience damage and wear such as on a keyring. TagVault is priced at $12.95 for one and $29.95 for three.

Spigen's sister brand Cyrill has an AirTag key ring case made from a vegan leather, which is available in black or stone starting at $17. The AirTag snaps into place and then the key ring portion attaches to your keys, a backpack, or other items.

You're going to find endless affordable AirTag housing options on Amazon from vendors in China and other countries, but there are a few unique options worth noting. The Silicone Case is a soft silicone casing that you slide your AirTag into, and then the back has an adhesive so you can attach it to various items like your phone. Something like this might be a good option if you want to attach an AirTag to the Apple TV remote or another item that stays primarily in the house. It's priced at $3, and the vendor says the adhesive is reusable.

If you want to add some flair to your ‌AirTags‌ or prevent them from getting scratched, you can find a series of custom skin options on Etsy. Skins are priced at right around $5 each.

Priced at $19, the Wairco Snap Case is an AirTag case that's designed to snap onto clothing. Wairco says that it can be fastened to a t-shirt, inside of a pants pocket, or the lining of a purse, backpack, or jacket. Wairco designed the case to track kids, pets, and elderly people, but it's worth noting that Apple does not recommend tracking people, instead recommending an Apple Watch with Family Setup for this purpose.

WaterField Designs has developed a Leather AirTag Keychain that houses the AirTag inside, with a series of perforations included to allow sound to pass through.

Have other suggestions of great ‌AirTags‌ cases that we should add to the guide? Let us know in the comments.

AngerDanger
This article is nice and all, but I already found the solution for me.

I think you are brilliant....but....reusing animations you used before just to score likes is just not done in my opinion.

A few things to consider: modeling, animating, and rendering take a bit of time, many animations are relevant to multiple articles, animations aren't seen by everybody the first time around, memes in general are often reposted repeatedly by folks who didn't make them, and there have been many AirTag articles published since I first made this, but I only repost when it seems especially pertinent.

Obviously you're free draw lines about what is and isn't done where you wish, plus humor is subjective. But this seems pretty innocuous in comparison to what some people post online. :)
Score: 15 Votes (Like | Disagree)

countryside
Got the Belkin and Apple Leather.

Go with Belkin. Cheap and gets job done. Not a fan of my leather.
Score: 14 Votes (Like | Disagree)

Does Tile have this many options?

To be fair, Tile has a mounting hole and I've never seen the need to put one in a case, especially as I've never paid more than $10 for a tile. Apple products, as always, are designed from the ground up to maximize needed accessories sold separately. It's not fair to flip that and pretend more accessories being available is a positive.

That said, Tile is a crappy product which I'm happy to dump for airTags.
Score: 10 Votes (Like | Disagree)

justperry
I like my Apple stuff, especially macs but I think this time Apple went too far by not having a damn hole in the Airtags just to make more money.

Tim Cook "We want to leave the world better than we found it"....Yeah right. :rolleyes:
Millions of unnecessary accessories for leaving out a hole.
Score: 6 Votes (Like | Disagree)
Read All Comments

Friday March 5, 2021 1:25 pm PST by Juli Clover
Apple is working on a MagSafe-compatible battery pack for the iPhone 12, which unlike prior Smart Battery Cases for earlier iPhones, will attach to the iPhone 12 models with magnets. The battery pack will be easy to pop on and off the iPhone, and because it will be easily removable, it won't be as bulky or as awkward as prior Apple-designed battery options. The MagSafe battery pack isn't out ...
Read Full Article • 53 comments

Thursday April 29, 2021 1:58 am PDT by Hartley Charlton
AirTag is Apple's newest product line, a small round disc used to track items using the Find My app. Yet Apple is not the first to offer item trackers of this kind. Tile has been making Bluetooth item trackers for almost a decade and is now AirTag's main competitor. As the two leading item trackers share a number of key features, it may not be immediately obvious which is better for your...
Read Full Article • 87 comments

How to Free Up Storage Space on iPhone and iPad

Thursday April 15, 2021 11:23 am PDT by Tim Hardwick
If your iPhone or iPad is full, there are several things you can do to claw back storage space. In this guide, we run through several options and methods available to free up storage on iOS devices. Keep reading to learn what they are. Every iPhone and iPad comes with a set storage capacity ranging from 16 GB to 512 GB for iPhone, and 16 GB to 1TB for iPad. While it's always a good idea to...
Read Full Article • 60 comments

What to Expect From Apple in 2021: New Apple Silicon Macs, iPhone 13, AirTags and More

Thursday December 31, 2020 7:00 am PST by Juli Clover
We're expecting 2021 to be an exciting year for Apple thanks to a renewed focus on the Mac. Apple debuted the first Macs with Apple silicon chip in late 2020, and Apple's M1 chips turned out to be unexpectedly powerful, leaving us looking forward to what's next. New iMacs and MacBook Pro models are rumored for 2021, with even better Apple silicon chips in the works. We can also count on new...
Read Full Article • 231 comments

Friday April 30, 2021 12:06 pm PDT by Juli Clover
Apple is developing a next-generation version of the M1 Apple silicon chip, which will tentatively be called the "M2." The M2 is believed to be shipping as soon as 2021, and we're already hearing a limited number of rumors about it. What We Know There are actually several successors to the M1 chip in the works at Apple's labs in Cupertino, and though we don't know the name of the...
Read Full Article

Tuesday May 11, 2021 3:43 pm PDT by Hartley Charlton
In April 2021, Apple revealed the second-generation Apple TV 4K, bringing high framerate HDR with Dolby Vision to the Apple TV for the first time and the A12 chip for improved performance, alongside a redesigned Siri Remote. The Apple TV HD was first released in 2015 and has remained in Apple's lineup since then as an entry-level option, and now it comes with the upgraded Siri Remote....
Read Full Article • 155 comments

Monday May 24, 2021 12:44 pm PDT by Juli Clover
Apple today released iOS 14.6 and iPadOS 14.6 to the public. The iOS 14.6 update isn't quite as significant as the iOS 14.5 update that preceded it, but it still introduces a number of notable new features. We've highlighted everything that's new in iOS and iPadOS 14.6 below. Apple Music Spatial Audio and Lossless Audio Support Apple in May introduced two new Apple Music features, which...
Read Full Article • 84 comments