Apple infringed on one of medical technology company Masimo's pulse oximeter patents when it launched Apple Watch models that use light sensors to measure the amount of oxygen in the blood, an International Trade Commission (ITC) judge ruled on Tuesday. 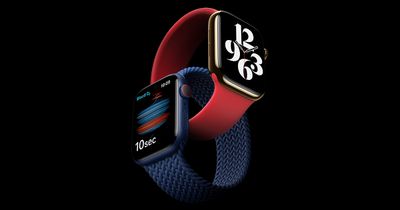 Masimo, which designs pulse oximetry devices, has been embroiled in an ongoing battle with Apple over several health capabilities found in some Apple Watch models, and Masimo has been pushing to have the models banned in the United States.

Medical grade pulse oximetry devices are what Masimo specializes in, and pulse oximetry is a feature that Apple added to the Apple Watch with the Series 6 model. The feature found in the Series 6 and later Apple Watch models uses light to detect the amount of oxygen in the blood, with the feature joining heart rate monitoring and ECG capabilities.

In Tuesday's ruling, the judge concluded that four other patents at issue were not infringed. The ITC will now consider whether to implement an import ban on Apple Watch models that include the blood oxygen monitoring feature, according to the medical device maker. The final determination is expected to be completed by May 10.

"We are happy that the judge recognized Apple's infringement of Masimo's pulse oximetry technology and took this critical first step toward accountability," said Masimo CEO Joe Kiani in a statement given to MD+DI. "Today's decision should help restore fairness in the market. Apple has similarly infringed on other companies' technologies, and we believe today's ruling exposes Apple as a company that takes other companies' innovations and repackages them."

"We respectfully disagree with today's decision, and look forward to a full review by the Commission," Apple said in a statement reported by Reuters.

Making numbers up but truly seems 99% here will blindly defend their Daddy Apple. The mods here don’t seem to do anything about it at all.

Why should mods police general opinions? If a majority wants to think or express themselves in a similar manner that’s their choice. It’s not really a role of mod’s to police conversations that don’t go against any of the sites policies.
Score: 34 Votes (Like | Disagree)

alex00100
Before people rush here accusing them of patent trolling, just think whether apple would do the same if the other company infringed apples patents.
Score: 24 Votes (Like | Disagree)

Skeptical.me
If Apple truly infringed on the patent of the technology, they should be held accountable
Score: 23 Votes (Like | Disagree)

Fun to look back at this thread for all the comments saying Masimo is wasting their time trying to sue Apple.
Score: 22 Votes (Like | Disagree)

laptech
Apple has a history of this, hiring/headhunting/poaching employees from rival companies and then low and behold, patents that Apple were not approved to use turn up in their products. Didn't this happen with with Qualcomm and Broadcom back in the day when they poached employees from those companies and didn't an ex-employee of a car company get arrested for stealing company files when poached by Apple for their Apple car project?
Score: 19 Votes (Like | Disagree)

Fun to look back at this thread for all the comments saying Masimo is wasting their time trying to sue Apple.

Making numbers up but truly seems 99% here will blindly defend their Daddy Apple. The mods here don’t seem to do anything about it at all.
Score: 16 Votes (Like | Disagree)
Read All Comments

Saturday February 4, 2023 10:05 am PST by Eric Slivka
Online retailer TigerDirect has slashed pricing on the M1 iPad Air in several colors, offering the base 64GB configuration for just $313.99 in Purple and Pink. Note: MacRumors is an affiliate partner with TigerDirect. When you click a link and make a purchase, we may receive a small payment, which helps us keep the site running. That's a savings of 48% compared to Apple's normal $599.00...
Read Full Article • 522 comments

Sunday February 5, 2023 6:06 am PST by Hartley Charlton
A new version of the Mac Studio with the "M2 Ultra" chip is unlikely to arrive in the near future, according to Bloomberg's Mark Gurman. In the latest edition of his "Power On" newsletter, Gurman explained that since the upcoming Apple silicon Mac Pro is "very similar in functionality to the Mac Studio," Apple may wait until the release of M3- or M4-series chips to update the machine, or...
Read Full Article • 436 comments