According to Bloomberg, Masimo claims that Apple stole secret information by pretending to have a working relationship with Masimo, and then hiring Masimo employees. Masimo also believes the Apple Watch is infringing on 10 Masimo patents. 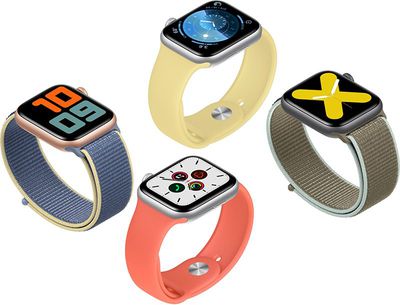 According to Masimo, Apple first contacted the company in 2013 and asked to meet for a potential collaboration, with Apple asking to "understand more" about Masimo's products to potentially integrate Masimo technology into future Apple devices. After what Masimo considered productive meetings, Apple began hiring away important employees.

Ahead of when the Apple Watch was released, Apple hired Michael O'Reilly, who had served as the Chief Medical Officer and EVP of Medical Affairs at Masimo. He has been working on Health Special Projects at Apple, and had a hand in the development of the Apple Watch.

O'Reilly wasn't the only hire from Masimo, as Apple also took on other former Masimo employees along with employees from other health-related companies during the time the Apple Watch was being designed. Marcelo Lamego, who served as CTO of Cercacor, for example, joined Apple not long after O'Reilly.

Masimo says Apple received confidential information from its hires, and launched a targeted effort to obtain "information and expertise."

Masimo and Cercacor are aiming to block further use of their patented inventions and are asking for unspecified damages. The two companies also want to add their engineers to four patents that were granted to Lamego after leaving the Cercacor.

swingerofbirch
Masimo is not at all a fly by night company. They're one of the gold standards if not the gold standard for oximetry in hospital settings, along with various other parameters.

And interestingly, their consumer product, the MightySat, had been an Apple Store exclusive for a while. It's still sold in their online store, possibly the retail stores as well. I assumed they had a good relationship with Apple due to that, also the fact that they have almost non-existent Android support for the MightySat.
Score: 13 Votes (Like | Disagree)

coolfactor
If Apple did (a) meet with the company, and then (b) hired the employees for their knowledge and skills, then I side with Masimo on this. While I love my Apple Watch, I don't want to see them trample over smaller inventive talent in the marketplace, and especially claim that they came up with the ideas entirely in-house.
Score: 11 Votes (Like | Disagree)

If Apple did (a) meet with the company, and then (b) hired the employees for their knowledge and skills, then I side with Masimo on this. While I love my Apple Watch, I don't want to see them trample over smaller inventive talent in the marketplace, and especially claim that they came up with the ideas entirely in-house.

Did Apple claim that this tech is their innovation? If they did then with this development it feels awkward :)

Why does everyone read a news article citing the PR department at a company which is suing Apple and assume that everything that is said is true?
Score: 7 Votes (Like | Disagree)

Many have been in the race to achieve non-invasive glucose readings for a long time. It is the holy grail of non-invasive monitoring and will be a major breakthrough in medical technology when announced. There are some companies closer to achieving this than others and I would strongly doubt Apple would start from scratch considering non-invasive monitoring companies have already begun working towards this achievement. I may be biased because I work at Masimo Corporation, however I wouldn't put it past Apple to try and license the best monitoring technology already in the market rather than start from scratch. I for one would certainly love to see Masimo technology in a wearable Apple device...I think that would be awesome!

Well... This may have occurred, just not the way that LightSpectrum expected or wanted it to.
Score: 7 Votes (Like | Disagree)

mannyvel
Well, they bring up a couple of issues, but really the only thing that's important is the patent infringement; all the rest of it is sort of BS. Non-competes are invalid in California, so the "hiring away employees" is irrelevant.

And in any case does the information in the employee's head belong to the company or the employee?
Score: 4 Votes (Like | Disagree)
Read All Comments

Sunday May 15, 2022 6:14 am PDT by Sami Fathi
iOS 16 will include new ways of interacting with the system and some "fresh Apple apps," Bloomberg's Mark Gurman has said, offering some more detail on what Apple has in store for the upcoming release of iOS and iPadOS set to be announced in a few weeks at WWDC. In the latest edition of his Power On newsletter, Gurman wrote that while iOS 16 is not likely to introduce a major face-lift to...
Read Full Article • 245 comments