TSMC's $12 billion chip plant currently under construction in Arizona will begin producing 4-nanometer chips as soon as it opens in 2024 thanks to urging from Apple and other companies, according to Bloomberg's Mark Gurman. 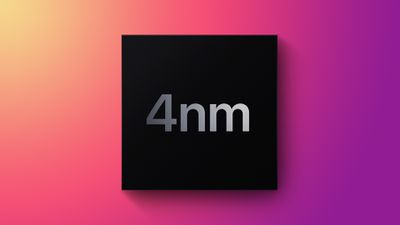 The plant had originally been planned to start with production of 5-nanometer chips, but with Apple and other companies increasingly looking to source components from the United States, TSMC has upgraded its plans so the facility will be able to supply more cutting-edge chips.

TSMC previously said it would make 20,000 wafers per month at the Arizona facility, although production may increase from those original plans, the people said. Apple will use about a third of the output as production gets underway.

Apple and other major tech companies rely on TSMC for their chipmaking needs, and the change means they'll be able to get more of their processors from the US. Apple Chief Executive Officer Tim Cook has previously told employees that his company plans to source chips from the Arizona plant.

The new plans are scheduled to be announced in Phoenix next Tuesday with President Joe Biden, Commerce Secretary Gina Raimondo, and Apple CEO Tim Cook expected to be in attendance, along with AMD CEO Lisa Su and Nvidia founder and CEO Jensen Huang.

In addition to the 4-nanometer production facility, TSMC will reportedly officially announce plans for a second phase involving an adjacent facility that will produce even more advanced 3-nanometer chips, a development that was revealed last week by TSMC founder Morris Chang.

Apple's latest chips are manufactured on a 5-nanometer process, and moving to more advanced processes should result in significant improvements in performance and power efficiency. Apple has been rumored to be using 4nm and 3nm processes for some of its upcoming M-series and A-series chips for use in Macs, iPads, iPhones, and other products.

Leon Ze Professional
I don't understand why some are negative about this? Diversification of silicon chip production has to start somewhere. It's only the beginning.
Score: 27 Votes (Like | Disagree)

Doesn’t apple already used “4nm” for the A16 chip in the iPhone 14 Pro? Or is this Arizona 4nm a different 4nm? Like a real 4nm as opposed to a 4nm that’s actually still 5nm?

I would hope that most people on these forums are intelligent enough to know that 4nm and 5nm are not what they would appear to honestly be, and very sadly this has become marking spin as opposed to genuine technical details.
It's a shame this happens.

Because of this marketing spin we have Intel considering renaming it's 7nm to 5nm.

Just wish companies would be accurate and honest.
Score: 20 Votes (Like | Disagree)

Doesn’t apple already used “4nm” for the A16 chip in the iPhone 14 Pro? Or is this Arizona 4nm a different 4nm? Like a real 4nm as opposed to a 4nm that’s actually still 5nm?

Since it's so close, it will be much fresher - possibly organic, similar to having a farm nearby.
Score: 15 Votes (Like | Disagree)

This is political? Uhh I guess we if we have to…

I was about to say the same. How on earth is this political at all? Are we "woke" ?‍♂️
Score: 12 Votes (Like | Disagree)

If a new N4 factory is opening in 2024, enhanced 5nm technology is going to stick around for quite a while.
Score: 9 Votes (Like | Disagree)

Mr Fusion
This is political? Uhh I guess we if we have to…

“When TSMC sends its chips, they’re not sending their best…”

If I had $12B I too would be demanding a lower nanometer chip. Another bullseye, Tim. ?
Score: 8 Votes (Like | Disagree)
Read All Comments