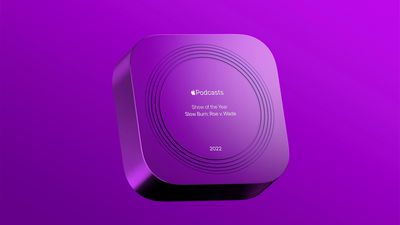 Apple says the podcast won the award in recognition of its latest season "Roe v. Wade," in which Slate executive editor Susan Matthews explored the events leading up to the landmark Supreme Court decision in 1973. The four-part miniseries was released throughout June and is being awarded for "outstanding quality, innovation, and impact."

The new award is made from 100% recycled aluminum and has the Apple Podcasts app icon on the front and the award winner printed on the back. It looks very similar to the App Store Award that has been awarded since 2020. Apple says the award represents the company's "decades-long commitment to supporting creators as they share their voices with the world and helping listeners to discover the best podcasts."

"Apple Podcasts is where users discover new shows, enjoy their favorites, unlock premium listening experiences, and support the creators who make them possible," said Oliver Schusser, Apple's vice president of Apple Music and Beats. "Podcasting plays an important role in our lives — helping us stay informed, keep entertained, and get inspired — and we're pleased to honor the Slate team with this recognition."

tomtendo
lol gee i wonder why they won!
Score: 37 Votes (Like | Disagree)

Canezmd
It's another Woke award!!! Who cares how many people actually listened to it or shared it with friends...
Score: 29 Votes (Like | Disagree)

I’ll never forget sitting at the Mexican restaurant on Highway 24 in my hometown in May 2020, reading this section of the book while eating lunch. It’s one of those life moments etched into my mind.

At birth, my name was Marquez Antonio Bowen. My father was listed as ‘unknown.’ I don’t know all that was going on in my mother’s life at the time (it seems nobody does), but it was decided that her mother would raise me—my grandmother—without me knowing the story. So, Marquez Antonio Bowen became Marcus Anthony Nixon. All through childhood, I had no clue that my older ‘sister’ was the one that actually gave birth to me, and I was too young and ignorant to ask why ‘mama’ was 40 years older than I was. No wonder that day as a child riding in the car, when I asked, “Do you remember the exact time I was born?” she responded, “I can’t remember. Ask your sister; she might remember.” The emotions that must have been in her mind at such a child-like question…

She eventually divorced her husband and remarried, so Marquez Antonio Bowen, that became Marcus Anthony Nixon, was now Robert Anthony Walker. That lasted a few years, and then ‘mama’ was murdered when I was 10. I still can visualize my older ‘sister’ arriving in the driveway and collapsing and crying like a baby while someone held her. It was in my mother’s will that if anything ever happened to her, my babysitters would become my parents, and they willingly did that Tuesday night in 1994.

The funeral came and went, and six days after the murder, we had a family meeting… I sat in my new ‘mama’s’ lap, and I found out that my ‘mama’ was not actually my mother. “Who is my mama?” At that point, my ‘sister’ started sobbing and repeating, “Please don’t hate me, please don’t hate me.” I hugged her and told her I didn’t hate her. I asked some questions that had no answers, and I grew up never bringing it up to her again. She loved me, made a hard choice, and I didn’t want to bring up any bad memories. She came to the hospital when my first daughter was born and was so excited. Sadly, she died of a seizure in 2010.

So, when I had a seizure in 2018, I naturally started wondering about my biological history and took a DNA test.You know that disclaimer on Ancestry’s website? “When using our Services, you may discover unexpected facts about yourself, or your family (e.g. you may discover an unknown genetic sibling or parent, surprising facts about your ethnicity, unanticipated genetic test results, or unexpected information in public records). Once discoveries are made, we can’t undo them.” LOL, Yeah, that disclaimer... you might uncover a script that would make a good Hallmark movie, an HLN docudrama, or something in between... oh me, oh my—maybe one day I can say more.

I have had three mothers who love me. My birth mother stayed in my life as an ‘older sister.’ My ‘mama’ raised me like her son though she was 40 years older than me and endured years of domestic abuse while doing the best she could for me. And the day she was murdered, my babysitter lost one of her best friends while getting a new son to raise. I’ve been loved by three women who consider me their son. I have no bitterness but am only filled with thankfulness. If I had any regrets, it would be personal and my personality—I know I am not the best sibling or son nor one to stay in touch as I should. Perhaps I won’t be an extreme introvert in heaven.

Having been that loved, I have no clue what is in a woman’s mind when making a choice such as the one that’s the topic of debate this week. My birth mother gave me to her mother, so clearly, she did not go down the path that is so much in this week’s news.

Whether Joanne Schieble and Abdulfattah Jandali have a child in Wisconsin that gets adopted, becomes Steven Paul Jobs, and changes the technological realm forever, or a young mother in Anderson gives birth to Marquez Antonio that becomes now middle-aged Tony in a little office at a country church south of Anderson, the famousness (or lack thereof) and the worldwide impact (or lack thereof) should make no difference in one’s ethic of life. We’ve all heard, “Don’t get an abortion! Your child might cure cancer!” Well, what if we say, “Don’t get an abortion! Your child might be a blue-collar worker that quietly loves his family, goes to church, loves Jesus, and dies of cancer with only a few people around him.” Whether someone cures cancer and lives long or dies early having accomplished little, does that make their life of any less worth?

You can search my social media history and find zero about politics, Obama, Trump, Biden, COVID, etc. There’s only so much in life you can care about and get outraged at. The older I get, the more I want to get outraged at my own sin and care about Jesus and my wife and kids. I’ll be dead in a few years, and I’m learning to focus on the stuff I can actually impact: my wife, my kids, about a dozen adults in SS, and a few dozen kids in the church youth department.

So, I purposefully stay ignorant of a lot of life’s controversies; there’s a lot in life I don’t know and stay out of. But I do know this: no matter how complicated the situation is, there is grace—common grace and saving grace—for the messiest of situations. Whether someone definitely impacts the world for many people or hopefully makes a small difference in the lives of a few people, one thing is certain…

They’ll never have the possibility if they never had the chance.
Score: 25 Votes (Like | Disagree)

neliason
Awards like this are meaningless. It is just a way for people to promote the narrative and people that they prefer. So it’s no surprise who the winner is and what the topic was.
Score: 24 Votes (Like | Disagree)

BreakingKayfabe
They give textbook (D) next to their names vibes lol
Score: 23 Votes (Like | Disagree)

Kylo83
Apple is going in the wrong direction, im sorry but how anyone can support ending a child’s life is beyond me. They won because of the politics that’s it
Score: 23 Votes (Like | Disagree)
Read All Comments