Top Stories: What to Expect From Apple in October, iPhone 14 Plus Launch, and More

The first week of October has passed, and while we're expecting to see a number of hardware and software launches from Apple in the coming weeks, there's no sign of a media event in the works. 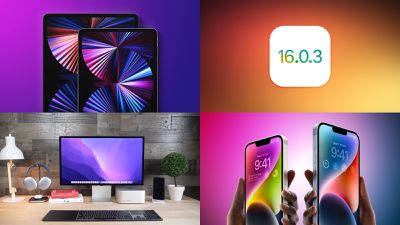 This week also saw the launch of the iPhone 14 Plus, the last member of the iPhone 14 lineup to become available following last month's introduction. We're also looking forward to operating system updates coming soon, with a bug fix iOS update likely imminent and a more substantial iOS 16.1 one coming alongside iPadOS 16 and macOS Ventura, so read on for details on these stories and more!

Apple Event Unlikely This October Despite Many New Devices Expected

While new iPad and Mac models are expected to be announced this month, Bloomberg's Mark Gurman believes that Apple is unlikely to hold a media event in October this year.

Gurman said "the big iPhone 14 unveiling last month was probably it for Apple in 2022 in terms of major presentations," suggesting that any more new products this year would be announced with press releases, media briefings, and updates to Apple's online store.

Updated versions of the iPad Pro, MacBook Pro, and Mac mini — all with M2 series chips — are "highly likely to launch" before the end of 2022, according to Gurman. He also said an updated Apple TV with an A14 chip and extra RAM was "getting closer and could potentially launch this year."

There are several remaining iOS 16 bugs that iOS 16.0.3 would hopefully address, including an issue with low volume during CarPlay phone calls placed with iPhone 14 Pro models, a string of text that can crash the Mail app, and more.

Apple is planning to launch an external monitor with a 27-inch mini-LED display in the first quarter of 2023, according to Display Supply Chain Consultants (DSCC) analyst Ross Young.

Apple's upcoming display is said to feature mini-LED technology along with ProMotion support, allowing for up to a 120Hz refresh rate. It's unclear if the monitor would be branded as a Studio Display or have a different name.

The first reviews of the iPhone 14 Plus hit just ahead of its launch on Friday, providing a closer look at the device in action.

Reviews highlighted the iPhone 14 Plus' impressively long battery life, while other new features include car crash detection, upcoming support for emergency texting via satellite starting in the U.S. and Canada, improved front and rear cameras, and more. U.S. pricing starts at $899.

The European Parliament this week voted overwhelmingly in favor of enforcing USB-C as a common charging port across a wide range of devices, including the iPhone and AirPods, by the end of 2024.

Rumors suggest that all iPhone 15 models will be equipped with a USB-C port next year, ahead of the EU's deadline. AirPods cases and MagSafe accessories are also expected to switch to USB-C.

iOS 16 was released to the public over three weeks ago with a customizable Lock Screen, the ability to edit recently sent iMessages, and much more. And in the coming months, iPhone and iPad users have even more new features to look forward to.

And yes, bring on 16.0.3. Hopefully will smooth out rough edges people are posting about.
Score: 4 Votes (Like | Disagree)

Cromulent
Just release Ventura already! Along with iPadOS 16.1, I'll be all set.
Score: 2 Votes (Like | Disagree)

After buying two Studio Displays, I have to admit i'll be gutted if the promotion ones are priced at a similar amount.

Oh you don't need to worry about that, Apple will squeeze money from clients for sure with this one
Score: 2 Votes (Like | Disagree)

I don’t believe the new Mac Pro won’t carry an event for it. It’s a mark in Apple’s history, such as the first M1, and the last and probably the most awaited Mac. Well, I think we Apple users are curious to see it.

Agreed, after all this time the new Mac Pro needs to be a big deal, justifying an event. But IMO a new MP also requires better chips than those available to ship in 2022; M2 Ultra is not enough. Ergo no new MP and no event.
Score: 2 Votes (Like | Disagree)

SteveJobs_
“tHeReS nO sIgN of a media event in the works”
Score: 1 Votes (Like | Disagree)
Read All Comments