As a means to customize their iPhones, many users want to use custom app icons on their Home Screen. iOS itself doesn't offer a native option to easily change and use custom app icons, but thankfully, the new iPhone 14 Pro and Dynamic Island make it easier to use a workaround to do just that. 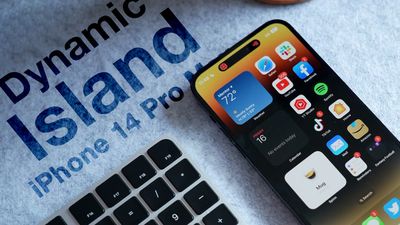 One of the most popular ways users have used custom app icons on iOS is with Shortcuts. Using the Shortcuts app on iOS, users can create a custom shortcut on their Home Screen with any image or custom app icon they wish that opens a specific app. The workaround has not been perfect since there are practical limitations that can be annoying.

Intrusive banner when using custom app icons on the iPhone 13 and older
Every time you tap on a custom app icon shortcut on your Home Screen, a large banner appears at the top of your display to confirm the shortcut is running. Many users find the banner distracting and intrusive, which makes the workaround less than ideal.

Thankfully, the new iPhone 14 Pro and the introduction of Dynamic Island make using custom app icons with Shortcuts more seamless and effortless. Dynamic Island on the latest high-end iPhones introduces an entirely new area at the top of the display where system-wide alerts and contextual information now appear at the top rather than obscuring other parts of iOS.

One alert that Apple has moved to Dynamic Island is Shortcuts. When running Shortcuts on the iPhone 14 Pro, there is no longer a banner that appears at the top of the display. Now, the shortcut runs seamlessly in Dynamic Island.

Users creating custom app icons was a trend in 2020 following iOS 14, which introduced redesigned widgets to the Home Screen on the iPhone. Since then, Apple has more openly adopted the idea of users customizing iOS to their specific likings, making it easier to use custom app icons and, of course, the entirely personalized Lock Screen in iOS 16.

jacjustjac
It still irks me a little that Apple needs us to buy a phone with a Dynamic Island just to make these constantly regular, pop-up system UI banner notifications less annoying and cumbersome. They could have improved notifications on phones without a Dynamic Island too, just saying.
Score: 18 Votes (Like | Disagree)

that’s a reason to upgrade alone

I think it’s more fun to upgrade in a group.
Score: 11 Votes (Like | Disagree)

Photo caption should read "Intrusive banner when using custom app icons on the iPhone 14 and older".
Score: 6 Votes (Like | Disagree)

I think it’s more fun to upgrade in a group.

Leon Ze Professional
Retrospectively, still feel this pill shape cut out should have been introduced on iPhone 13, maybe even as far back as iPhone 12.

Dynamic islands is welcome and a step in the right direction. Unfortunately, the notch hung around too long in my opinion.
Score: 2 Votes (Like | Disagree)
Read All Comments