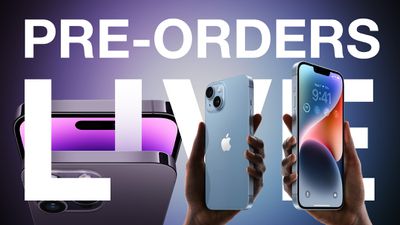 Pre-orders are available in more than 30 countries and regions around the world, and in the United States, those who used Apple's "Get Ready" feature should just need to hit a button to get their orders placed.

The ‌iPhone 14‌ models did not receive design changes and use the same A15 chip that was in the iPhone 13 Pro models, but they do have updated camera technology, support for satellite connectivity for emergencies, and car crash detection, among other features.

With the ‌iPhone 14 Pro‌ and Pro Max, Apple made notable design changes, doing away with the notch in favor of the "Dynamic Island," a pill-shaped cutout that can change shape and context using software, offering up notifications, tracking of background tasks, and more.

As for the the ‌AirPods Pro‌ 2, Apple added a new H2 chip that allows for 2x better Active Noise Cancellation and an updated Transparency Mode that can cut down on loud, persistent sounds like sirens and construction work. Audio has been improved, there are new touch controls, and the battery lasts longer. The ‌AirPods Pro‌ 2 are priced at $249.

There's no word yet on whether we can expect shortages of the new iPhone models and the ‌AirPods Pro‌ 2, but it is a good idea to pre-order right away just in case. New colors, such as deep purple, could be particularly popular and could sell out quickly.

U.S. carriers like Verizon, AT&T, and T-Mobile are also accepting preorders for the new devices, as are other carriers worldwide. Retailers like Best Buy, Target, and Walmart have pre-orders available too.

Customers who pre-order one of the new ‌iPhone‌ models can expect to begin receiving their deliveries on Friday, September 16 for the ‌iPhone 14‌, 14 Pro, and 14 Pro Max. The ‌iPhone 14‌ Plus will be available on October 7, and the ‌AirPods Pro‌ 2 will begin arriving to customers on September 23.

sniffies
Not for me.

antiprotest
They're not. I guess this is just a rumor.
Score: 5 Votes (Like | Disagree)

Coreymac84
I know we all want our phones next Friday but it’s hysterical to watch everyone act like brats because of a 2 week delay, then make statements like “forget it I’m not buying it” oook ??
Score: 5 Votes (Like | Disagree)
Read All Comments

Friday September 9, 2022 6:43 am PDT by Joe Rossignol
Shortly after Apple started accepting pre-orders for all four iPhone 14 models, delivery estimates are beginning to slip into October on its online store in the U.S. and select other countries. Exact availability varies by configuration ordered. Many customers who managed to work around issues with Apple's online store and place an order quickly are set for launch day delivery. iPhone 14,...
Read Full Article • 234 comments

Wednesday September 7, 2022 5:01 pm PDT by Juli Clover
Following the debut of the iPhone 14, iPhone 14 Plus, iPhone 14 Pro, and iPhone 14 Pro Max, Apple is letting customers get ready for pre-orders, which will begin on Friday, September 9 at 5:00 a.m. Pacific Time. With the Apple Store app on the iPhone, prospective buyers select their preferred phone, confirm their status with their carrier, add accessories, select an AppleCare+ plan, and add ...
Read Full Article • 190 comments

Monday September 12, 2022 4:27 am PDT by Hartley Charlton
The iPhone 14 and iPhone 14 Plus have seen "bad" pre-order results, indicating that Apple's positioning of the two new standard models may have failed, according to Apple analyst Ming-Chi Kuo. In his -14-first-weekend-online-pre-order-survey-110411040b5d">latest post on Medium, Kuo explained that the iPhone 14 Pro and iPhone 14 Pro Max have seen "neutral" and "good" pre-order results...
Read Full Article • 683 comments

Thursday September 29, 2022 7:26 am PDT by Sami Fathi
Speaking at Università Degli Studi di Napoli Federico II in Naples, Italy, Apple CEO Tim Cook said that not too long from today, people will wonder how they led a life without augmented reality, stressing the "profound" impact it will have on the not so distant future. At the university, Cook was awarded an Honorary Degree in Innovation and International Management and also sat down for a...
Read Full Article • 361 comments