Apple this week expanded its Self Service Repair program to MacBook Air and MacBook Pro models equipped with the M1 series of chips, providing customers in the U.S. with access to select parts, manuals, and tools to repair the notebooks. 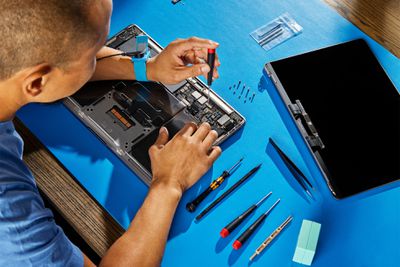 While the program's expansion is good news for the right-to-repair movement, repair guide website iFixit is not entirely pleased with the implementation. (It's worth noting that Apple is now a competitor to iFixit in this area of business.)

The issue is that Apple's program does not yet allow a customer to order a standalone replacement battery for the MacBook Pro. Instead, a customer must order a part known as the "top case," which includes a glued-in battery. Then, the customer must follow Apple's exhaustive 162-page repair manual to replace the "top case" in their MacBook Pro, as the procedure involves removing every other component from the case.

Top cases are an expensive part given that they include the keyboard, battery, speakers, and more. For example, Apple's self-service parts store charges $527 for a top case for the 14-inch MacBook Pro, making it significantly more expensive to replace a MacBook Pro's battery through the program in comparison to having an Apple Store or Apple Authorized Service Provider complete the job for $199.

"Apple is presenting DIY repairers with a excruciating gauntlet of hurdles: read 162 pages of documentation without getting intimidated and decide to do the repair anyway, pay an exorbitant amount of money for an overkill replacement part, decide whether you want to drop another 50 bucks on the tools they recommend, and do the repair yourself within 14 days, including completing the System Configuration to pair your part with your device," wrote iFixit. "Which makes us wonder, does Apple even want better repairability?"

Apple says a "battery replacement part" will be available for the MacBook Pro at some point "in the future," which could make the replacement procedure easier, although details remain slim. But even if Apple releases a standalone replacement battery, it will likely remain cheaper and easier to have Apple handle the task.

You wouldn't, but someone else might. That's the beauty of having a choice.
Score: 51 Votes (Like | Disagree)

contacos
Apple is so environmental, until it harms their business. All this to replace a battery, still? I already couldn’t believe it when they had to replace the keyboard and the housing to replace the battery on my mbp in 2012. ridiculous
Score: 31 Votes (Like | Disagree)

Surely you are capable of replacing a car battery. The main point is that a phone battery should be mandated that it is easily replaced like a few years back. Likely a laptop battery could be similarly done if Apple was foreced to make it so.
Score: 26 Votes (Like | Disagree)

Madhatter32
My PowerBook 540c and PowerBook G3 both had hot swappable compartment bays for batteries. It is sad that these days people can only dream about such a great high-tech feature. It is borderline obscene that swapping a battery is considered to be a "repair".
Score: 24 Votes (Like | Disagree)

But you would change the batteries in a remote control, right?
That’s because they’re designed to be user replaceable. If Apple did the same…? They could and they used to, but they choose not to.
Score: 20 Votes (Like | Disagree)

chr1s60
This would be like Toyota selling a DIY oil change kit that requires you to swap out the engine. Ridiculous.
Score: 17 Votes (Like | Disagree)
Read All Comments