The team behind the popular Pixelmator series of image editing apps today announced that the Pixelmator Photo app for the iPhone and iPad is switching to subscription-based pricing with an update rolling out now on the App Store. 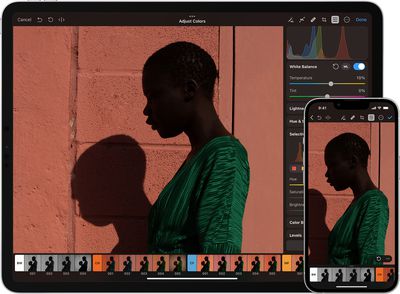 For new users, Pixelmator Photo now costs $4.99 per month or $23.99 per year, while existing users of the app will continue to have "unlimited access" without having to pay again. A lifetime purchase option will remain available for $59.99, which is significantly more expensive than Pixelmator Photo's previous one-time price of $7.99.

In a blog post, the Pixelmator team admitted that the subscription-based pricing model is more expensive, but argued that there are "some pretty big problems" with an upfront pricing model, including slower development and a focus on new users over existing users. Among other reasons, Pixelmator also noted that the App Store does not allow paid apps to offer free trials or upgrade discounts for major new versions.

"The hope is that there are enough users who use the app regularly and feel that the annual or monthly fee is worth it," said Pixelmator. "It looks like this is the best way to ensure Pixelmator Photo can continue to be developed long into the future."

Pixelmator also provided a sneak peek at its Pixelmator Photo app for Mac, which will be a "completely native app" that is "designed from the ground up just for Mac." Pixelmator plans to release the app late this year or early next year and says those who subscribe to Pixelmator Photo for the iPhone/iPad now will get Pixelmator Photo for Mac for free when it launches. Existing users will be eligible for a discounted subscription.

Pixelmator informed MacRumors that it doesn't have any immediate plans to switch the standard version of Pixelmator for iOS or Pixelmator Pro for macOS to subscription-based pricing and is working on a major update to Pixelmator Pro that will be free as usual.

tmoerel
Another app I will stop using!
Score: 53 Votes (Like | Disagree)

Why, if you already have it?

Because it’s just a matter of time till it stops working, due to incompatibility that Apple introduces with every major macOS update.
Score: 24 Votes (Like | Disagree)

Dredd67
While it might be understandable from the businesses point of view, for the customer it's just hostile.
There's one ultimate greedy person, and it's Apple's current CEO (or the people he has to answer to).
Unrestrained capitalism always pushes towards the most profitable route, whatever the consequences. It's like electricity or water, always choosing the path of least resistance to get where it can.
It's the responsibility of the architects of the bigger structures to design a platform that doesn't allow such customer exploitation and keep the business healthy on the long run. Here, it's the contrary and it's actively pushing app makers towards the greedy route, leaving no choices to the customer but to either accept, or leave the platform.
How is this any good on the long term except for those reaping the benefits ?

I understand the concerns of app makers, and yes, they have to make a living. But this is NOT the solution. Allowing users to try the apps (not speaking about freemium here), allowing special sales or promoting them (like Steam), allowing true upgrade paths (reduced prices for owners of a previous version), ... this should have been part of the platform from the start. Building a healthy relationship with your customers is what makes them get back to you when you have a new version or a new product, or simply when they can afford it.

Some plans make sense, because the service usage itself is a running cost by nature (insurances, access to a media library like streaming platforms or e-books). Something like a processing software doesn't belong there. If you push it to the limits, maybe having access to an online storage like adobe cloud, or some cloud processing which could not be done on device would be acceptable, as an option.
For the life of me I can't think why I would have to subscribe to an app I have to use, but only seldomly like a Photoshop or a Lightroom alternative. Adobe understood that and kept the lifetime licenses for Photoshop Elements. If you have a pro workflow it would probably need cloud storage anyways so a plan makes sense, and that cost is part of your business expenses.

So to get back to your reaction, there's no need to be sarcastic. Yes people have to make a living, but their options are in the hand of the people who control the platform itself, and these are the people who make them miserable, not the customers. App store developers should unionize and reclaim what their work should get them, and not play the devil's game and offset their issues onto their own customers, it will only end poorly for everyone but the person at the top of the pyramid.
Score: 24 Votes (Like | Disagree)

Why, if you already have it?

Out of principle!
Score: 23 Votes (Like | Disagree)
Read All Comments