The camera bump on the upcoming iPhone 14 Pro Max is expected to be the largest rear lens housing Apple has ever installed on its flagship smartphones, and a new photo offers a rare glimpse at just how prominent it is compared to Apple's predecessor device. 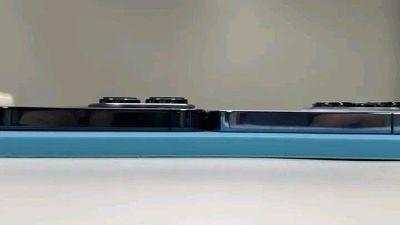 iPhone 14 Pro Max dummy (left) vs iPhone 13 Pro Max
All iPhone 14 models are expected to see upgrades to the Ultra Wide camera on the rear of the device, but the iPhone Pro models could see significant improvements to the main wide-angle camera and updates to the telephoto lens.

Apple analyst Ming-Chi Kuo believes that the iPhone 14 Pro models will feature a 48-megapixel Wide camera, which would be a major improvement over the current 12-megapixel camera, as well as 8K video recording capabilities. The new camera is also likely to be capable of taking 12-megapixel shots through a process known as pixel-binning, which merges data from multiple smaller pixels on the camera's image sensor into one "super-pixel" for improved low-light sensitivity.

As the image above shows, this will force Apple to substantially increase the height of the rear camera housing on the Pro models. Sourced from Twitter user @lipilipsi and shared by Majin Bu, the side-on shot shows the larger camera bump ridge on an iPhone 14 Pro Max dummy unit compared to the rear camera system on an iPhone 13 Pro Max.

According to schematics leaked back in February, the camera bump on the iPhone 14 Pro Max will be 4.17mm thick, up from 3.60mm in the iPhone 13 Pro Max. The size of the camera bump is also expected to expand about 5 percent in each direction, going from the current width of 35.01mm to 36.73mm and height of 36.24mm to 38.21mm.

Whether the enormity of the camera housing is a worthwhile trade-off for enhanced photo capabilities will be something users will have to decide for themselves, but suffice to say that cases designed for the iPhone 13 models are unlikely to fit the iPhone 14 models because of the size increase.

Apple is expected to introduce the iPhone 14 models at an event likely to be held in September 2022, if Apple follows previous launch timelines. For everything we know about the new lineup, be sure to check out our dedicated iPhone 14 and iPhone 14 Pro rumor roundups.

RammyXX
I was hoping Apple would eventually get rid of that camera bump, but it seems they're going the opposite direction. That the iPhone wobbles when put on a flat surface is the only blemish of an otherwise beautiful design.
Score: 27 Votes (Like | Disagree)

tbh I'd rather my iPhone 13 mini had a significantly worse camera and no bump. Remember the iPhone 4 where you could just lay your phone flat on a table, and take perfectly acceptable photos?

I do not agree with this sentiment at all. Give me the improved camera quality.
Score: 17 Votes (Like | Disagree)

SirAnthonyHopkins
tbh I'd rather my iPhone 13 mini had a significantly worse camera and no bump. Remember the iPhone 4 where you could just lay your phone flat on a table, and take perfectly acceptable photos?
Score: 12 Votes (Like | Disagree)

mciarlo
I personally don't care about the camera getting a tiny bit better with an ever expanding camera bump. Just give me a flat back phone and better battery life FFS.
Score: 12 Votes (Like | Disagree)

theadz01
Once you put it in a case (which I always do) the camera bump sits flush with the case, so it's not an issue for me
Score: 11 Votes (Like | Disagree)
Read All Comments

Monday April 18, 2022 3:22 am PDT by Tim Hardwick
A photo claiming to show molds of Apple’s upcoming iPhone 14 series models has appeared online, offering another preview of the relative sizes of the rumored devices. It's worth bearing in mind that the molds shown in the image sourced from Weibo have likely been made for use in the production of third-party iPhone cases rather than actual handsets. Still, they do appear to line up with...
Read Full Article • 206 comments

Tuesday May 17, 2022 4:32 am PDT by Tim Hardwick
An image showing a series of third-party cases for the forthcoming iPhone 14 lineup has turned up on Weibo, providing a stark reminder of just how large the camera housing on Apple's flagship smartphones is about to become. After seeing lackluster sales of the iPhone 13 mini, Apple this year is set to focus on larger iPhone sizes, and we're expecting to see a 6.1-inch iPhone 14, a 6.1-inch...
Read Full Article • 109 comments