Android-based smartphone company OnePlus today announced the launch of its newest device, the OnePlus 10T, which we were able to check out ahead of time. The OnePlus 10T, priced starting at $649, boasts upgraded camera technology, so we thought we'd pit it against the iPhone 13 Pro Max to see just how it measures up.

Subscribe to the MacRumors YouTube channel for more videos.
The OnePlus 10T has a triple-lens rear camera system that includes a new wide-angle 50-megapixel Sony IMX766 sensor with optical image stabilization, an updated Nightscape feature, and improved HDR performance. There's also an 8-megapixel ultra wide camera and curiously, a 2-megapixel macro lens. Most triple-lens camera systems include a telephoto lens, but OnePlus has opted for a macro mode instead. 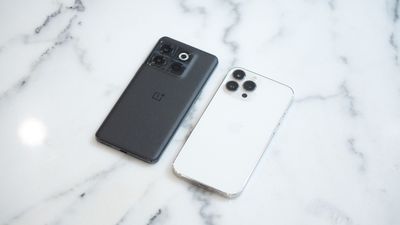 Comparatively, the ‌iPhone 13 Pro‌ Max is outfitted Wide, Ultra Wide, and Telephoto lenses, all of which are 12 megapixels.

To see raw, unedited photos from each camera, make sure to watch our video so you can see how the 50-megapixel lens compares to the 12-megapixel lens. You might think the OnePlus 10T would outperform the ‌iPhone 13 Pro‌ Max because of the higher megapixel count, but in practice, the two phones output images that are similar in quality.

The ‌iPhone 13 Pro‌ Max seems to be better at balancing shadows and highlights, with images from the OnePlus 10T looking more washed out and with less texture. The ‌iPhone 13 Pro‌ Max's A15 chip does a lot of heavy lifting with Smart HDR 4 and Deep Fusion, which go a long way toward preserving texture and detail.

On the OnePlus 10T, there's a Super HDR feature to improve contrast between the foreground and background lighting, and that effect is visible in the images. The 50-megapixel sensor comes in to play for ultra high quality images, which the iPhone doesn't offer, but you may not notice a lot of difference between the ‌iPhone‌ images and the higher-quality 50-megapixel images in the video.

Portrait mode and night mode work well on both smartphones, though the overall look is slightly different because of differences in software algorithms. 4K video capture is also similar, but the ‌iPhone‌ wins out when it comes to stabilization.

As with most modern smartphones, choosing between photos comes down to personal preference because the quality is almost identical, with software playing a large role in how photos turn out. What do you think of the images from the OnePlus 10T? Let us know in the comments.

TheYayAreaLiving ?
OnePlus 10T seems to be showcasing lower contrast. I do like the fact it starts with only $649.00.

Hands down! iPhone wins! Wait till iPhone 14 Pro Max is released with 48MP. It's game over!
Score: 10 Votes (Like | Disagree)

nfl46
I’m impressed at the starting price of $649. Not bad in today’s market. The camera did a solid job.
Score: 6 Votes (Like | Disagree)

The iPhone has this one. I can’t wait for the 14 Pro Max, I will be upgrading and probably do a comparison like this with the 13 Pro Max.

But why even compare?
The 10T is a upper mid range phone not even close to a flagship level.
Score: 6 Votes (Like | Disagree)

svenmany
I do my best to avoid Chinese products if there are alternatives, even if I have to spend more. Unfortunately, so often there are not alternatives. For phones, it's easy to avoid a Chinese brand, but not Chinese parts or manufacturing.
Score: 5 Votes (Like | Disagree)

deathcab
While I certainly don't trust that 100% of Apple's privacy claims are entirely true, I definitely trust them more than any of the China-phone manufacturers like Oppo / OnePlus (hell, I even trust Google more than those companies).
Score: 5 Votes (Like | Disagree)

GeoStructural
The iPhone has this one. I can’t wait for the 14 Pro Max, I will be upgrading and probably do a comparison like this with the 13 Pro Max.
Score: 4 Votes (Like | Disagree)
Read All Comments