Accessory maker Hyper, known for its range of chargers, hubs, and battery packs, recently introduced the HyperDrive Thunderbolt 4 Power Hub, which it says is the world's first Goshen Ridge Thunderbolt 4 hub with an integrated power source. 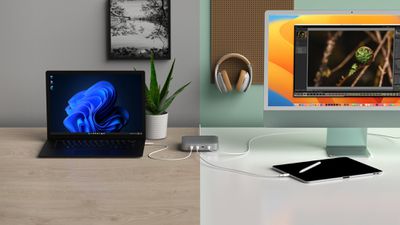 Available on Kickstarter, the hub includes a built-in GaN power source that alleviates the need for an extra power brick and allows it to operate with a standard power cable, ultimately resulting in a more streamlined setup.

The HyperDrive Thunderbolt 4 Power Hub can be preordered from Kickstarter for $179, a 40 percent discount off of the planned retail price, and it is set to ship out in November 2022.

Note: MacRumors is an affiliate partner with Kickstarter. When you click a link and make a purchase, we may receive a small payment, which helps us keep the site running.

likegadgets
Sounds interesting but I would not touch a Hyper product with a 10 foot pole. Kickstarter - iffy delivery and no returns. Hyper is horrible with support.
Score: 7 Votes (Like | Disagree)

I don't understand how moving the power supply from a brick to inside the casing makes it more expensive. If anything, isn't that fewer parts? maybe a little more cooling required?

Because power bricks are far cheaper due to economies of scale. 95% of docks/hubs on the market today use a reference design from from various companies in Shenzhen. Anker hubs are made by CE-Link. Satechi hubs are by Gopod Group. This Hyper dock is based on a niche design.
Score: 6 Votes (Like | Disagree)

iGeneo
Never Hyper. Bought their 100W GAN on KS a while back. Damned thing could’ve manage to charge my phone and iPad at the same time. Sent them a video, they sent replacement, happened with the “new” one… threw it in the bin and haven’t looked back.
Score: 4 Votes (Like | Disagree)

jmpage2
I have been burned with no recourse multiple times by Kickstarter projects to the tune of a few hundred bucks.

Whole lotta nope on anything that shows up on that hell-hole site.
Score: 3 Votes (Like | Disagree)
Read All Comments

Tuesday April 19, 2022 9:14 am PDT by Joe Rossignol
Following a successful crowdfunding campaign on Indiegogo, accessory maker Hyper today announced that its HyperDrive Duo Pro hub is now available to purchase for use with 2016 and newer MacBook Pro models and 2018 and newer MacBook Air models. The form-fitting hub features a 7-in-2 design, meaning that it connects to both Thunderbolt ports on one side of a compatible MacBook and provides...
Read Full Article • 32 comments

Deals: Satechi Offering 20% Off Sitewide This Week Only

Wednesday June 15, 2022 6:25 am PDT by Mitchel Broussard
Satechi is offering 20 percent off sitewide to coincide with Father's Day this weekend, marking a great chance to save on the company's best accessories. In order to get the discount, you can shop on Satechi's website and then enter the code FATHERS at checkout. Note: MacRumors is an affiliate partner with Satechi. When you click a link and make a purchase, we may receive a small payment,...
Read Full Article • 13 comments

Wednesday June 22, 2022 12:38 pm PDT by Juli Clover
The iPad will no longer be able to be used as a home hub following the launch of iOS 16, iPadOS 16, macOS Ventura, and the HomePod 16 software this fall, Apple confirmed today. As discovered in iOS 16 code by MacRumors contributor Steve Moser, Apple says that the iPad will no longer be supported as a home hub. This information will be displayed in the Home app after updating to iOS 16.A home ...
Read Full Article • 169 comments

Wednesday May 4, 2022 7:16 am PDT by Joe Rossignol
Apple recently started selling a 3-meter Thunderbolt 4 Pro cable through its online store, as spotted by French website MacGeneration. The cable can be used to connect a Mac equipped with Thunderbolt ports to Apple's new Studio Display and other peripherals. Image Credit: MobileSyrup Priced at $159 in the United States, the 3-meter cable provides users with a longer option than the 1-meter...
Read Full Article • 157 comments

Shop Even More Back To School Apple Accessory Deals From Satechi, Anker, and Das Keyboard

Tuesday August 9, 2022 10:00 am PDT by Mitchel Broussard
Last week we shared back to school discounts on Apple-related accessories from numerous retailers, and this week we're tracking sales coming from a new crop of companies like Satechi and Anker. Note: MacRumors is an affiliate partner with some of these vendors. When you click a link and make a purchase, we may receive a small payment, which helps us keep the site running. Satechi Starting...
Read Full Article • 3 comments

Thursday October 7, 2021 8:38 am PDT by Joe Rossignol
Accessory maker Hyper today announced the release of its new 6-in-1 hub for iPad models with a USB-C port, including the latest iPad Pro, iPad Air, and iPad mini. Key features of the hub include a form-fitting design and built-in media shortcut keys. The hub fits snugly around the flat edge of recent iPad models, providing access to play/pause, rewind, and fast forward keys for audio and...
Read Full Article • 54 comments

Wednesday August 3, 2022 8:16 am PDT by Joe Rossignol
OWC today announced that its ultra-fast Envoy Pro FX external storage drive is now available in a larger 4TB capacity, with pricing set at $899 in the United States. The drive was first released in early 2021 in 240GB, 480GB, 1TB, and 2TB capacities. The Envoy Pro FX is equipped with a Thunderbolt 3 port for ultra-fast data transfer speeds up to 2,800 MB/s when connected to a Mac with...
Read Full Article • 37 comments