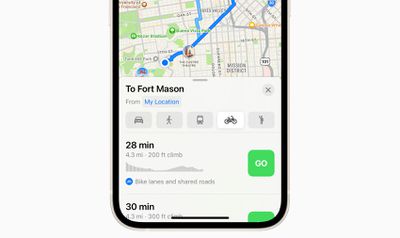 Apple Maps offers cycling directions along bike lanes, bike paths, and bike-friendly roads as much as possible, complete with details like elevation, how busy a street is, and whether there are stairs along a route. On the Apple Watch, voice guidance and haptic feedback make it easier for users to stay focused on the path ahead.

Apple is playing catch up here with Google Maps, which began rolling out cycling directions in 2010 and now offers the feature in over 30 countries. However, Google Maps is only just now beginning to roll out granular details for cycling directions, like elevation, how busy a street is, and whether there are stairs along a route.

fwmireault
They need to rollout cycling directions in more places. Having only selected cities in Canada and Europe is ridiculous. It’s 2022
Score: 17 Votes (Like | Disagree)

DTphonehome
Across all 50 states? That's a long bike ride! Good luck getting to Hawaii!
Score: 13 Votes (Like | Disagree)

TheYayAreaLiving ?
Just checked the cycling route from Miami, Florida to Key West and it gives you the cycling direction. Pretty impressive.
Score: 9 Votes (Like | Disagree)

_Spinn_
Glad Apple is continuing to improve maps. Hopefully we will see offline support added at some point.
Score: 9 Votes (Like | Disagree)

BGM
could it offer cycling directions in Amsterdam, that would be neat.
Score: 9 Votes (Like | Disagree)
Read All Comments

Tuesday April 19, 2022 3:01 am PDT by Tim Hardwick
Apple has added cycling directions for several parts of the Midwest, including Chicago, Detroit, Indianapolis, Cleveland, Columbus, Cincinnati, and Charleston. According to Apple Maps enthusiast Justin O'Beirne, the updated coverage reportedly includes all of Ohio and West Virginia, as well as parts of Illinois, Indiana, Michigan, and Virginia. Since the beginning of April, Apple has been ...
Read Full Article • 41 comments

Thursday July 7, 2022 9:15 pm PDT by Sami Fathi
The revamped and improved Apple Maps experience is now live for users in France, New Zealand, and Monaco, according to Apple Maps enthusiast Justin O'Beirne. The new Apple Maps experience brings with it more accurate and faster navigation, improved imagery with three-dimensional landmarks and locations, and detailed views of roads, shopping malls, and more. On a related note, according to...
Read Full Article • 49 comments

Friday August 5, 2022 9:17 am PDT by Juli Clover
Apple has been working to expand its updated Apple Maps app to additional countries, and has started testing the revamped design in Israel, Palestine, and Saudi Arabia, according to Maps expert Justin O'Beirne. It will be the sixteenth expansion of the updated Apple Maps design since the update first rolled out in September 2018. Apple in 2020 completed its U.S. rollout, and has since...
Read Full Article • 40 comments

Monday June 6, 2022 1:42 pm PDT by Sami Fathi
Apple Maps is gaining support for multi-stop routing later this fall with iOS 16, while the updated Apple Maps experience will be expanding to 11 more countries. Later this fall, users will have the ability to plan trips with up to 15 stops and sync the trip between their iPhone and Mac. In addition, Apple Maps will soon be able to provide transit updates to users, including how much their...
Read Full Article • 48 comments

Wednesday July 27, 2022 2:29 am PDT by Tim Hardwick
Google is rolling out some new Maps features to its iOS and Android apps for the summer, including new location sharing options, cycling directions enhancements, and photorealistic aerial views of famous city landmarks. First, location sharing. Google says it wants to make it easier to see when someone who has shared their location with you arrives or leaves a place, "so you can more easily...
Read Full Article • 35 comments

Friday August 12, 2022 2:34 pm PDT by Juli Clover
There's just about a month to go until Apple holds its annual September event focusing on new iPhone and Apple Watch models. We thought we'd take a quick look at everything that's rumored for Apple's September event to give MacRumors readers a rundown on what to expect when the first fall event rolls around. iPhone 14 The iPhone 14 can probably be described more as an "iPhone 13S" because...
Read Full Article • 130 comments