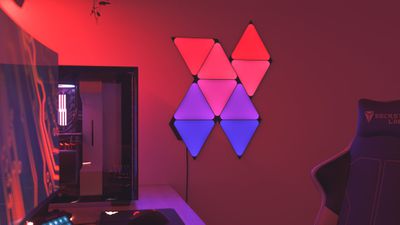 Lighting panels that are available in black have been a frequent customer request that Nanoleaf decided to deliver on for its anniversary. The Shapes Ultra Black Triangles have a 360-degree black finish that's quite unlike Nanoleaf's previous white plastic panels that some have criticized for the design when not activated.

We were able to take a look at the Shapes Ultra Black Triangles ahead of their launch, and the design should appease those who have always hoped for a darker, less stark color. Nanoleaf's standard white panels, when off, can look odd on the wall because of the white plastic design, but the black panels have a more natural art-like look when turned off.


The panels look more like a decorative piece when not in use, and the black finish does not at all diminish the bright colors that are available when the lights are turned on. The dark panels are prone to picking up fingerprints, though, so Nanoleaf has included a microfiber cloth. If you use the touch-based features, expect to need to clean them every so often because the fingerprints are noticeable when the panels are turned off.

Aside from the color, the Nanoleaf Shapes Ultra Black Triangles are identical to the standard Shapes Triangles, with no notable design changes, so expect the same rounded corners. The panels also include all of the same features, including access in the Nanoleaf app, HomeKit connectivity, and interoperability with Mini Triangles and Hexagons.

The Shapes Ultra Black Triangles ship with black mounting plates, power supply, and controller for a streamlined look. The mounting plates were added with the Shapes line, and they make it much easier to get the panels off of the wall without adhesive damage because it's simpler to get to the adhesive pull tabs.

Because the panels feature the same design as the standard Triangles, it's worth noting that there is some light leak in the corners, and with certain colors, the corners can look a bit brighter than the rest of the panel. This isn't super noticeable in day to day use, but it may bother some people.

Dark colors look great with the darker panels, with rich dark blues, purples, and greens blending well with the black color. The black panels provide a much different aesthetic with lighting patterns that turn the panels off and on because you get a black triangle thrown into the mix, and it's a sleeker look than you get with the white panels.

There are thousands of pre-created community lighting scenes to choose from in the Nanoleaf app, along with built-in options in the app, plus you can create all kinds of light scenes yourself with different colors and light patterns. Schedules and automations are available, and the panels can be linked up with other ‌HomeKit‌ devices and controlled with Siri commands.

Other available features include Screen Mirroring to match content on your display and the Rhythm Music Visualizer for matching the rhythm of the color changing to music that's playing. If you're familiar with Nanoleaf's previous lighting panels, these are the same, just in a new, improved color option. If you want to know more about the available feature set, we have a full review available on the Shapes line.

The Shapes Ultra Black Light Panels can be purchased for $220 starting today, and are available as a limited edition product. The base kit includes nine panels, and an additional three can be purchased in an Expansion Pack for $70.

Nanoleaf is also launching exclusive merchandise, a charity livestream, giveaways, and surprise gift packages that will go out to 100 customers around the world. Nanoleaf merchandise that includes a bottle shaker, hat, pillow, and more can be acquired through Mystery Boxes and Swag Boxes priced starting at $35.

japanime
This company sure gets a lot of front-page coverage on MacRumors. Is the product really that great?
Score: 6 Votes (Like | Disagree)

Bow Commander
They are awesome. My son has a set on his wall. Still WILDLY overpriced though.
Score: 3 Votes (Like | Disagree)

PowerButton
Not too bad of a price for some abstract practicals. They would go well together with my Hue lights. ?
Score: 2 Votes (Like | Disagree)

This company sure gets a lot of front-page coverage on MacRumors. Is the product really that great?

It is kinda cool for a creative person. There's a lot of potential looks it can have.
Score: 2 Votes (Like | Disagree)