Nothing Announces Phone 1 With Unique Translucent Design and 'Glyph Interface'

After weeks of teases, Nothing has officially announced its Phone 1 smartphone. It's the second major product release by OnePlus co-founder Carl Pei's company, following last year's Ear 1 true wirless earbuds, and the device has a modest starting price of £399 ($475). 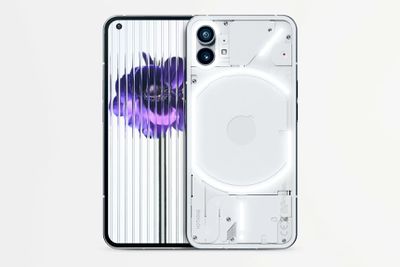 Available in white or black, the distinctive-looking 6.55-inch aluminum phone has a translucent back featuring hundreds of LEDs that form the "glyph interface" – a series of quirky light patterns that function as visual notifications when the phone is placed down, amongst other uses.

For example, the central circle lights up to indicate wireless or reverse wireless charging, and the bottom light strip acts as a charging progress bar when the USB-C cable is plugged in. In addition, users can assign certain light patterns to contacts to identify who is calling.

The lights also work as a fill light for the 50-megapixel main and ultrawide cameras, which feature optical and electronic image stabilization and also work in night, portrait, and document scanning software modes. The ultrawide sensor can also take macro shots up to distances of 4cm.

The Phone 1 has a 1080p OLED display with an adaptive refresh rate up to 120Hz, HDR10+, and a peak brightness of 1,200 nits, while a small hole-punch cutout in the top-left corner of the screen houses a 16-megapixel selfie camera. There's also an in-display fingerprint sensor for biometric authentication.

The handset is powered by a Qualcomm Snapdragon 778G Plus processor, and can be paired with either 8GB or 12GB of RAM and 128GB or 256GB of storage. The device has an IP53 rating for dust and water resistance, and features a 4,500mAh battery that can be charged at up to 33W via cable or 15W wirelessly.

The Android-based "no bloatware" Nothing OS has some notable unique features, including the aforementioned glyphs (twinned with retro-sounding notification alerts), Tesla-specific functions like unlocking doors and turning on air conditioning, and the ability to display NFTs on the lock and home screens.


Nothing says it has received more than 200,000 pre-orders for the Phone 1, which will go on sale on July 21 in over 40 markets, including the UK, Japan, India, and countries in mainland Europe. Currently there are no plans for a widespread release of the Phone 1 in the United States. More information and pre-order requests are available on the Nothing website.
Tag: Nothing
[ 193 comments ]


Real World: This looks great with some nice things no one has previously thought of
Macrumors: THIS SUCKS
Score: 110 Votes (Like | Disagree)

Pilot Jones
Good to see a little shake-up in the smartphone world.

Instead of being a straight-forward boring rectangle chassis focused on cramming specs to create value, the Phone 1 is purely a tech-geek lifestyle product and derives its value from being aesthetically unique. Not all value has to be tangible.

Whether it succeeds or not is yet to be seen, but I'm happy someone is taking a different approach to a product category that has more or less homogenized by now.
Score: 46 Votes (Like | Disagree)


Real World: This looks great with some nice things no one has previously thought of
Macrumors: THIS SUCKS

A lot of people on this forum don't have any fun in real life and it shows in threads like these LOL
Score: 27 Votes (Like | Disagree)

Prabas
For $399 it looks amazing. Specs are great. Software updates will probably stop after few years but I mean, look at the price. Cameras of course won't be nearly as good as on iPhone but again it doesn't cost over $1000. I wouldn't mind buying it.
Score: 23 Votes (Like | Disagree)

PetterA
Competition is good for everyone
Score: 20 Votes (Like | Disagree)
Read All Comments