Apple CEO Tim Cook is on the guest list for this year's Sun Valley Conference, which begins Wednesday in the resort town of Sun Valley, Idaho, according to Deadline. Known as "summer camp for billionaires," the conference allows tech and media moguls to negotiate deals between leisure activities like golfing and whitewater rafting. 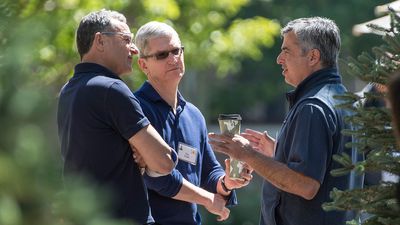 Cook (center) at the 2016 Sun Valley Conference (via Bloomberg News)
Cook has attended the retreat several times over the years, often alongside Apple's services chief Eddy Cue, but it has yet to be confirmed if he will be present this year. Apple's negotiations have typically been kept under wraps, but the conference provides the company with an opportunity to secure media deals for services like Apple TV+.

Hosted by investment bank Allen & Company, the conference has served as a catalyst for some major deals in the media industry, ranging from Disney acquiring ABC in 1995 to Amazon founder Jeff Bezos' purchasing The Washington Post in 2013. This year's event reportedly takes place from July 5 through July 9, with private discussions to begin July 6.

seanmills1020
I will be there trying to convince Tim to bring back Aperture, HyperCard, and xServe.
Score: 22 Votes (Like | Disagree)

It’s fitting. Steve Jobs wanted Apple’s products to be for the common man, although he failed at it due to higher prices than the rest of the industry. But at least he had those good intentions. Tim Cook, on the other hand, wants to make Apple an exclusive brand (like Burberry, which is why he hired Angela Arhends) and raised prices thus raising the barrier to entry and excluding the common man. So it’s fitting that Cook is attending that exclusive event since his goal is to turn Apple into the computer equivalent of an exclusive nightclub like Studio 54.

Agree. Steve Jobs did try. Apple prices were high, of course, especially on first gens. But then on subsequent releases, there were efforts to bring prices to moderate levels.

But Tim Cook operated differently. Only going upwards, and instead of innovating for the entry level, he just used old designs and components to segregate the haves and the have nots.

Eg. when introducing the first glass/aluminum iMac, Jobs set the base config with 20", an increase in size vs the previous 17". Giving more value for the same price. Then there are certain price points that Jobs were adamant in maintaining, eg $499 for flagship base config iPads. And let's not forget how Apple tackled the iPod market, with clear innovations at every segment (regular iPod, mini/nano, shuffle).

Today's Apple is clearly different, eg. still selling Apple Watch S3 that won't be updated ever, pushing every new models at higher price point than previous, etc. In tackling the lower segments, the current Apple is so lazy that they just reused old designs (iPhone SE, base iPad) instead of innovating.
Score: 19 Votes (Like | Disagree)

DeepIn2U
I sincerely hope nobody makes any deals with Zuckerberg nor Meta this year.
Score: 11 Votes (Like | Disagree)

ThomasJL
It’s fitting. Steve Jobs wanted Apple’s products to be for the common man, although he failed at it due to higher prices than the rest of the industry. But at least he had those good intentions. Tim Cook, on the other hand, wants to make Apple an exclusive brand (like Burberry, which is why he hired Angela Arhends) and raised prices thus raising the barrier to entry and excluding the common man. So it’s fitting that Cook is attending that exclusive event since his goal is to turn Apple into the computer equivalent of an exclusive nightclub like Studio 54.
Score: 10 Votes (Like | Disagree)

CarAnalogy
I hope some of their billionaire buddies ask them to fix Siri.
Score: 10 Votes (Like | Disagree)

Tuesday August 23, 2022 10:50 am PDT by Joe Rossignol
Apple CEO Tim Cook, former Apple design chief Jony Ive, and Emerson Collective founder Laurene Powell Jobs will be among the speakers at Vox Media's Code 2022 conference at The Beverly Hilton hotel in Los Angeles. The in-person event is set to take place on September 6-8, but it's unclear exactly when Cook, Ive, and Powell Jobs will be speaking. The discussions will be hosted by veteran...
Read Full Article • 56 comments

Monday May 23, 2022 8:27 am PDT by Mitchel Broussard
Apple CEO Tim Cook has made the list of TIME's 100 Most Influential People of 2022, earning a spot in the "Titans" category. TIME shares this list every year, showcasing the most influential celebrities, executives, actors, musicians, and more. Tim Cook has made the list many times in the past, including just last year. In 2022 he's featured in the "Titans" category, and other categories...
Read Full Article • 116 comments

Thursday September 8, 2022 3:53 am PDT by Sami Fathi
Apple CEO Tim Cook has shot down the idea of iOS adopting RCS messaging, a format that would make it significantly easier for iPhone and Android users to send high-quality messages, videos, and photos to each other within the Messages app on iOS. During a panel at Kara Swisher's final Code Conference yesterday, Cook was asked why iOS has not yet adopted support for the RCS standard and how...
Read Full Article • 511 comments

Friday September 16, 2022 8:03 am PDT by Sami Fathi
Earlier this month, Apple's CEO Tim Cook, former Apple design chief Jony Ive, and Emerson Collective founder Laurene Powell Jobs participated in a panel at Kara Swisher's final Code Conference, where they discussed Steve Jobs and a wide range of other topics. For the first time since that conference, the full video of the hour-plus-long discussion has been shared on YouTube. During the...
Read Full Article • 49 comments

Apple Gives Up Board Seat at Chinese Ride-Hailing Company Didi